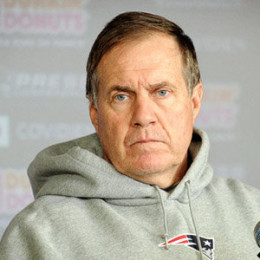 Bill Belichick is an American football coach who is the head coach of the New England Patriots of the National Football League (NFL). He is the son of Jeannette and Steve Belichick. His father, Steve, was a longtime college football scout and coach who worked for 34 years at the U.S. Naval Academy. He graduated from Annapolis High School in 1970. Belichick is the NFL's longest-tenured active head coach, and currently is 4th in regular season coaching wins in the NFL.

Bill Belichick is in a romantic relationshop with his long time girlfriend, Linda Holliday. The couple first met in 2007 and since then they are together. Their relationship is going strong, as it stands but they have no plans for engagement or marriage coming up in the near future.

Holliday served as the  executive director of his foundation, the Bill Belichick Foundation.

Priorly, Belichick was married to Debby Clarke, but they divorced. They allegedly separated before the 2004 season, which was disclosed by media in 2005. Belichick was also accused of maintaining a relationship with former Giants receptionist Sharon Shenocca, which helped precipitate her divorce. Belichick was seen with Linda Holliday of Jupiter, Florida several times in Arizona. So he may have dated many girls in past but after his split with his former wife, he has not involved himself in other marital relationship.

Bill Belichick is one of the sucessful American footballcoach. He has estimated net worth of $35 million. His first salary was $25 per week job as an assistant to Baltimore Coltshead coach Ted Marchibroda in 1975

Bill Belichick was born on April 16, 1952, in Nashville, Tennessee to Jeannette (Munn) and Steve Belichick. He is American and belongs to the White-American ethnicity.

Belichick was raised in Annapolis, Maryland where his father worked as an assistant football coach at the United States Naval Academy.

In 1970, she completed her graduation from Annapolis High school where he used to play football and lacrosse. He enrolled at Phillips Academy in Andover, Massachusetts. Later, the school honored him with  Athletics Hall of Honor in 2011.

Belichick attends the Wesleyan University and he served as the captain of the lacrosse team. In 1975, he received his bachelor's degree in economics, he was also the member of Chi Psi fraternity.

Belichick was married to Debby Clarke, but they divorced in the summer of 2006. The reason for his divorce assume to be his relationship with Sharon Shenocca. They have three children together.

Amanda is a 2007 graduate of Wesleyan University, where both she and her father played lacrosse. After college, she worked at Connecticut preparatory school Choate Rosemary Hall as a lacrosse coach and member of the admissions department. In 2009, she became an assistant coach for the University of Massachusetts Amherst women's lacrosse team

Stephen played lacrosse and football at Rutgers University on scholarship. Stephen was hired as an assistant coach for the New England Patriots in May 2012 and currently serves as the team's safeties coach, a position he attained in 2016.