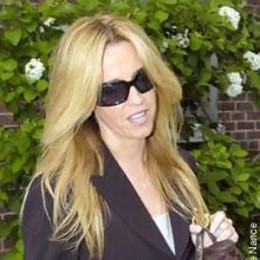 Sharon Shenocca is the receptionist working with the giants emerged. She came to all over the media due to her affair with Bill Belichick. She met the famous coach in 1980 and there were many controversial things happening in their life. She was one of the beautiful women with whom Belichick fell in love. Although she was a married woman he started affairs with her which created a great problem in her married life.

Shenocca was previously married to Vincent Shenocca, a construction worker. The couple is blessed with two children aged 19 and 17.

The couple managed to be together for 10 long years but their relationship crumbled when he found his wife in a relationship with Bill Belichick who divorced his first wife Debby Clarke.

Vincent mentioned in the court papers that Belichick 'has had a relationship with his wife'. He accused his wife of committing adultery with Belichick.

Shenocca, on the other hand never confirmed that she was dating Belichick while being with her husband calling him a 'family friend'. Later, she confessed in testimony that she previously denied receiving money and gifts from Belichick.

She admitted in Supreme Court in Morristown that the football guru FexExed her at least $150,000 in cash. He paid for her lavish vacation and also bought her a home worth $2.2 million. He paid for her vacations in Jamaica, Puerto Rico, and Florida and paid $50,000 for her rentals at the Jersey Store in 2006.

Shenocca and Belichick met for the first time while working for the New York Giants. She was working as a receptionist while Belichick worked as an assistant coach. He started sending her about $3,000 per month after Vincent took her credit card. When asked in February 2007, she admitted that she still receives the same amount of money from Belichick.

Later, she mentioned that Belichick is with another woman 'Linda Holliday'.

Details about Shenocca's work experience is not revealed in the media and that's why her net worth and assets are also a mystery. As of 2019, Sharon Shenocca has an estimated net worth of $2.75 million.

Sources reported that Bill Belichick bought a $2.2 million Park Slope townhouse for her to live with her kids. Belichick later sold the five bedrooms and three bathrooms residence for $2.75 million in 2012 as the judge ruled over the house.

Vincent said he intercepted envelopes containing $3,000 which Belichick (coach with the New England Patriots ) send to his wife monthly starting in 2005 around the same time Vincent took away Sharon’s credit cards and added that Sharon has committed adultery with William Belichick at various times and places presently unknown.

Sharon Shenocca definitely worked at a number of locations but she came into the limelight when she had an affair with the three-time Super Bowl champion coach Bill Belichick.

She and Belichick worked together for the New York Giants where Belichick was a coach while Shenocca worked as a receptionist. She also had a Jersey-Store.

She was married to Vincent Shenocca with whom she had children. But they separated due to her affairs rumor with someone else.