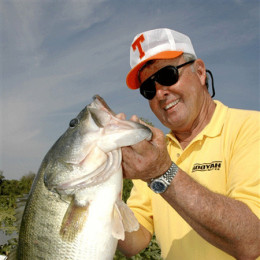 An angler and host who is popular for hosting the program like a fishing television series on NBC Sports and Bill Dance Outdoors which is aired through Outdoor Channel. He was raised in Raised in Lynchburg, Tennessee when he was a child. He is a son of William Dance who was a doctor. When he was young, he wanted to be a doctor like his father but after the grisly motorcycle accident in the 1960s he changed his mind and he competed in bass tournaments. Later he was sponsored to host a TV show by fishing lure manufacturer company to promote their products. He is also famous on YouTube for his blooper outtakes from his television shows.

Bill Dance was born on October 7, 1940, in Collierville, Tennessee USA. He is American and belongs to the White-American ethnicity. He was raised in  Lynchburg, Tennessee. He wanted to be a doctor during his early days just like his father, William Dance, and grandfather but change his mind after happening upon a grisly motorcycle accident in the early 1960s.

Bill Dance started his professional career as a fisherman. He competed in the bass tournaments and later a fishing lure manufacturer suggested Dance to start his own TV show to promote the product. The show originally began on ABC affiliate in Memphis, Tennessee in 1968.

His signature look includes sunglasses and a Tennessee Volunteers baseball cap and received his first cap from their coach, Doug Dickey in late 1960s. He was the member of International Game Fish Association's Hall of Fame.

Dance founded a company, Th3 Legends along with his fellow fishermen, Roland Martin and Jimmy Houston to sell the signature product.

Bill Dance married his longtime girlfriend, Dianne Dance. The duo exchanged a vow in the private intimate ceremony in the presence of their closed ones and family members. They are together for more than four decades.

Dance is also known for his bloopers on YouTube from his TV show and large facebook followers.

Bill Dance has an estimated net worth of $4 million. The source of his income is hosting TV shows and authoring books.

She is gorgeous lady. Couple's picture while they were together in fishing events can be found in different sites. Together they are parents of four children.

He is the eldest son of the family. He is a handsome guy.

He is the second son of the couple. He resembles more like his father.

He is handsome boy. He is a healthy boy and sometimes is seen with his father in his shows.

She is the only daughter beside three sons. She is very beautiful.