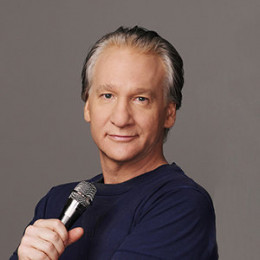 An American comedian, writer, producer, political commentator, Bill Maher is a son of Julie (Berman) Maher, a nurse, and William Aloysius Maher, Jr., a network news editor and radio announcer. He attended Cornell University, where he double majored in English and history, and graduated in 1978. Maher began his career as a stand-up comedian and actor. Maher holds the record for the most Emmy nominations without a win, having been nominated on 22 occasions and not winning once.

Bill Maher was born in New York City, United States. He is the son of William Maher and Julie Berman. His father was a radio announcer and network news editor, while his mother was a nurse. He was raised in the neighborhood of the River Vale, New Jersey.

Maher wen to Pascack Hills High School, and later graduated from Cornell University with a B.A in English in 1978. Bill was raised as a Catholic and was not aware of his mother’s Jewish identity until he was a teenager.

Maher began his career as a comedian and actor. He was the host of the New York City comedy club Catch a Rising Star in 1979. In 1983, he made his debut with the future film D.C Cab, directed by Joel Schumacher.

Maher is best known for the HBO political talk show Real Time with Bill Maher (2003–present) and the similar late-night show called Politically Incorrect (1993-2002), originally on Comedy Central and later on ABC. He received a Hollywood Walk of Fame star on September 14, 2010.

In 2014, Maher was dating Ontario-born singer Anjulie Persaud. He shares no children from any of his affairs.

Bill Maher's net worth is estimated to be $100 million, as of 2018. His source of income includes his earnings from his career as a writer, producer, and political commentator. He reportedly pockets an annual salary of $10 million from his successful career.

Bill is known for his relationship with Playboy Cyber Girl Coco Johnsen, who sued him in 2004 for $9 million as a result of "pain and suffering".