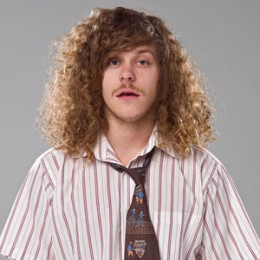 Black Anderson was born on 2nd March 1984 in Sacramento Country, California, U.S. He is a son of Tim Anderson and Lori.

He attended Clayton Valley High School in Concord, California and then studied at Orange Coast College, in Costa Mesa, where he met his future co-star Adam DeVine. While in college he even worked as a pizza delivery driver.

He used to have long curly hair but shaved it off due to peer pressure in 1998. Later, he moved to Los Angeles and started working with improvisational comedy troupes including The Groundlings and Upright Citizens Bridge.

Anderson started his career as a comedy actor after forming the sketch comedy group Mail Order Comedy along with his fellow friends Anders Holm, Adam DeVine, and Kyle Newacheck in 2006. The group together toured live and achieve huge success on websites such as YouTube and Myspace.

The same year, he worked on the Television series, Crossbows & Mustaches, as an Executive producer. After working for the TV series, he made an appearance in the movie, 420 Special: Attack of the Show! From Jamaica, in 2008, where he portrayed the character of Limahl Spellswell.

He then appeared in the TV drama series, 5th Year and worked as an actor, co-creator, writer and executive producer in the drama series, The Dude’s House.

In 2011, he made an appearance in the comedy movie, National Lampoon’s 301: The Legend of Awesomest Maximus, directed by Jeff Kanew, which starred Will Sasso, Kristanna Loken, and Sophie Monk.

Apart from acting, he has given his voice to the character Dagda in the 2013 American 3D computer animated action-adventure movie, Epic, directed by Chris Wedge. The animated movie was one of the successful hit movies which earned $268.4 million in the box office collection. It also won Motion Picture Sound Editor award and was nominated for Annie Awards, Black Reel Awards, Satellite Awards, World Soundtrack Academy awards and so on.

Moreover, he starred on the American situational comedy television series, Workaholics, between 2011 and 2017. It was created by him along with Adam DeVine, Anderson Holm, Kyle Newacheck, Connor Pritchard and Dominic Russo. Also, he made a cameo appearance in Neighbors and Scouts Guide to the Zombie Apocalypse.

Anderson married Rachael Finely, a fashion designer on 7th September 2012. They have a child, a girl, Mars Ilah Anderson. After living together for 5 years as husband and wife, the couple divorced in 2017.

He is a huge fan of the hip-hop music scene in the East Bay area, where Lil B is one of his favorite performers.

Once he fractured his spine during a house party by jumping from the roof of the house onto a beer pong table and went through surgical treatment on 17th December 2011.

After receiving popularity as a comedian actor, Anderson earned a lucrative net worth around $3 million.

Black Anderson married Rachael Finely on 7th September 2012. Rachael is a fashion designer. According to the sources, the couple separated for at least six months and divorced in 2017.

Born in 2014, Rachael Finely is one and only daughter of Racheal Finely and Black Anderson.