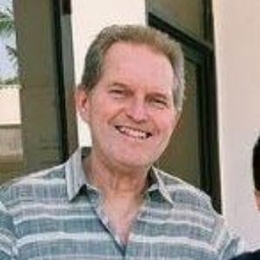 Bob Condor is a celebrity father of popular actress and songwriter Lana Condor. Besides, Bob is also Pulitzer-prize nominated journalist who serves as a senior producer at NHL Seattle and a former Vice President at Yahoo!

Bob Condor is known for being the non-biological and adoptive father of American singer and actress Lana Condor. Likewise, Bob is also a Pulitzer-prize nominated journalist who serves a senior producer at NHL Seattle since March 2019 and is a former Vice President at Yahoo!. 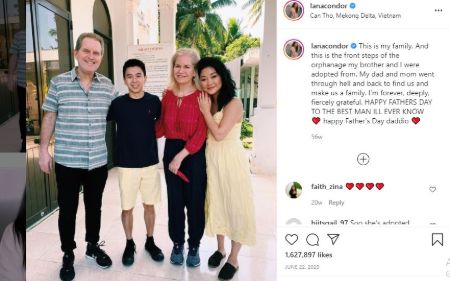 Bob Condor pictured together with his wife and kids. SOURCE: Instagram(lanacondor)

Coming to his relationship status, Bob Condor is a married man. Bob walked down the aisle with his longer-term girlfriend turned wife, Mary Carol Condor. Together with their wife Carol, Bob raises two adopted children, actress Lana Condor, born in May 1997, and Arthur Cordon. Both of Bob's children are adopted and of Vietnam natives.

In addition, Bob with his beloved wife now crossed over decades of togetherness as a husband & wife without any signs of divorce. However, Bob prefers to keep his married life a secret. Therefore, the details regarding the wedding ceremony and how the couple first met always remain a mystery.

The non-biological daughter of Bob, Lana Condor, initially lived in an orphanage for her first months before Bob and Mary adopted her on October 6, 1997. As for now, Lana is a popular American actress and singer. Speaking of her relationship, Lana enjoys a romantic relationship with boyfriend Anthony De La Torre.

Likewise, Anthony is also an American actor, singer, and songwriter best known for his role as young Jack Sparrow in Pirates of the Caribbean: Dead Men Tell no Tales. The lovebirds also made their appearance on the red carpet for 2017, Unforgettable Gala held at the Beverly Hilton Hotel. Ever since their fairytale meeting, Condor & De La Torre have always stayed together & resided in Seattle, Washington. Lana and Anthony also own a pet dog named Emmy.

How rich is Bob Condor?

Bob Condor only became popularafter his actress daughter's fame. Nevertheless, Bob is an experienced journalist, having worked as Vice President of Yahoo Sports. Bob serves as a senior producer at NHL Seattle, pocketing $301,400 per annum, and summoned almost $1 million from his journalism career.

Check out the video of Lana Condor making a potato eye-patch with her father Bob Condor below.

Additionally, Bob's daughter Lana made her acting debut at 18 for the marvel movie X-Men Apocalypse(2016) for the role of Jubilee. Later, she gained more popularity from the Netflix romantic drama film To All the Boy I've loved before as Lara Jean Covey in 2018.

Not to mention, for her Netflix series To All the Boy I've loved before, Lana got nominated for the Teen Choice Awards twice in 2019. Lana is also YouTuber having a self-titled Youtube Channel with over 862.5k subscribers. There, she uploads her music videos and travel diary videos with her boyfriend. Speaking of Lana's wealth, the young actress has amassed a staggering networth of around $2 million.

Lana Condor is the adopted daughter of Bob Condor and his wife, Mary Condor.

Arthur Condor is the adopted son of Bob Condor and his spouse Mary Condor along with Lana Condor.