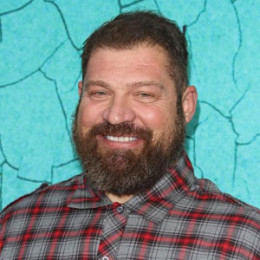 Brad Williams Henke is a well-recognized personality in the entertainment industry. He is most known for his portrayal of a gay man in the TV series Orange Is The New Black.

Brad William Henke was born on 10 April 1966. He hails from Columbus, Nebraska.

William graduated from the University of Arizona. While in University he used to play football as a defensive lineman.

Brad began his career as a football player. He joined the New York Giants in the 1989 NFL Draft. After playing with the team for several years he was drafted to Denver Broncos. He played with the team in Super Bowl XXIV against San Francisco 49ers. He often got injured while playing and also did six ankle surgeries. He had to retire from his football career in 1992.

Afterward, Henke got involved in the acting field beginning with commercials since 1994.  He made his film debut with Mr. Wrong in 1996. Later, he got an opportunity to appear in several television dramas such as October Road, Around June, The Amateurs, World Trade Center, In the Valley of Elah, Choke, Sherrybaby, Must Love Dogs and Fury. He also performed in the American sitcoms including ARLI$$, ER, Dexter in 2006, Lost in 2009-10, Justified in 2011, The Office in 2013, and Orange Is the New Black in 2016-17. His most recent work is Sneaky Pete in 2017. He won Screen Actors Guild Award for his mesmerizing performance in the series Orange Is The New Black in 2016.

The 51-year-old Brad was once a married man. He married Katelin Chesna in 2001. Katelin is an actress known for her work in True Blood, and How I Met Your Mother. He exchanged vows with Katelin to be his wife in 2001 after dating since 1990. They also adopted a foster child. However, due to some differences, they divorced in the year 2008. It is said that he divorced her due to his sexual orientation. He is currently a single man.

Henke earns quite a lucrative amount from his career as an actor. He also made some amount as a footballer too. His current estimated net worth is $900,000.

Katelin Chesna is the ex-wife of Brad Williams Henke. The duo married in the year 2001 and eventually divorced in 2008. There were rumors that the pair divorced due to William's change in sexual orientation.