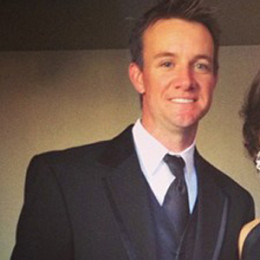 Brian Hollins is a husband and long-time lover of American soccer player as well as the FIFA World Cup Champion and the two times Olympic Gold Medalist Carli Lloyd. Hollins is a pro golfer.

Brian Hollins was born on July 14, 1984. He is from New Jersey. He went to Delran High School and attended the Golf Academy of the South in Altamonte Spring, Florida.

Hollins is a pro golfer. He also served as an assistant golf pro at the Trenton Country Club in New Jersey. Previously he worked as a teaching pro and assistant pro at Will Brook Country Club. He also worked at the Laurel Creek Country Club.

Besides that, he has competed on the Tarheel and Hooters Tours. Meanwhile, he qualified for the U.S. Open and recorded a birdie on the second extra hole.

Brian Hollins is a married man. Olympic gold-medal winner and a professional soccer player Carli Lloyd is the beautiful wife of Hollins. They started dating in their high school sophomore year whereas got engaged after 15 years of their relationship in January 2013. The duo finally tied the knot on November 4, 2016, and is residing in Mount Laurel, New Jersey. The ceremony was held in the presence of friends and family.

As a pro golfer, Brian earns a decent amount from his career. His net worth is possibly not less than six figures.