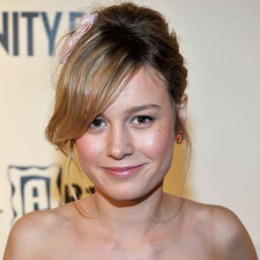 Brianne Sidonie Desaulniers, better known by her stage name "Brie Larson", is an actress and singer. She is famous for playing in United States of Tara and in independent films, including 2013's The Spectacular Now and Short Term 12.

Brie Larson is possibly single as of now but previously, she was engaged to her boyfriend, Alex Greenwald from 2016-2019. The couple first met in 2013 and soon after started dating.

Brie Larson holds a net worth of $10 million. The main source of her income is from her craeer as an actress and filmmaker. Her annual salary is $1 million.

Brie Larson was born on October 1, 1989, in Sacramento, California, the U.S. to Heather and Sylvain Desaulniers.

She began her career at the age of 6, performing in sketches on The Tonight Show with Jay Leno. In 2005, she released an album of her own music, Finally Out of P.E.