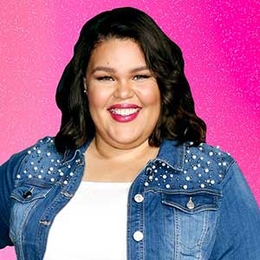 Loving your body is one of the toughest jobs today people can be dealt it with but not in the case of actress, Britney Young. She is one of those celebrities who never affect their talent by their appearances.

Britney Young has won several hearts as "Carmen Wade" from Netflix popular series, GLOW and became everyone's favorite. Her character is the most happening one in the series, but it is same in her real life as well, let's find out,

Young is in a romantic relationship with her longtime boyfriend, whose name is yet to revealed. The couple is together for many years but Britney only official her relationship on the occasion of her beau birthday on July 2019 via Instagram,

So grateful to ring in another birthday with you. Wonder what this years birthday picture will look like. Happy birthday babe #happybirthday

It seems like, the actress is happy with her partner and can't wait to spend the rest of her life. She chooses to stay confidential about her love life back then due to some personal reason but whatsoever the reason; she finally opens up about her relationship to the public.

In the entertainment-industry actress means a slim body with flawless skin but Britney breaking all the stereotypes makes her own mark in Hollywood. It's not like she doesn't face body shaming, but she is comfortable with her body and never led negativity affects her personality.

Previously, in an interview, talking about her body size, she said,

"We want to celebrate women of all shapes, all sizes, all colors. It’s a goal of ours to show people from all walks of life and make everyone feel included. I think that’s something we need to do a better job of in Hollywood, and I’m glad to be on a show that is doing that.’’

More to that, she also vocals about the bitter reality of the perfect meaning of actress in Hollywood.

The 32 years old actress has 38.4k+ followers on her Instagram. She often shares posts with her co-stars and girlfriends. Moreover, she also updated her fans with her personal and professional upcoming.

Britney Young is an actress by profession. She only featured in few filmographies in her career, and fortunately, all of them was a commercial success, so, her net worth might be in good figure.

The main cast of GLOW stars like Sydelle Noel has a net worth of $1 million and Britt Baron possesses a total net worth of $2 million.

Britney Young was born on 1988 in Tokyo, Japan but she raised in Eagle River, Alaska. She holds American nationality and belongs to mixed ethnicity as her father is African-American, while her mother is white.

Young graduated from the USC School of Cinematic Arts in Los Angeles. Soon after graduation, she started auditioning for tv series and luckily got a role of Nicky Warner in Crazy Ex-Girlfriend. She also starred in Those Who Can't and Better Things.