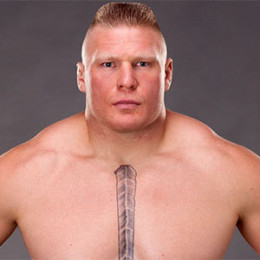 American professional wrestler and mixed martial artist, Brock Lesnar is the son of Stephanie and Richard Lesnar, who owned and operated a dairy farm. He attended Bismarck State College, where he won the National Junior College Athletic Association (NJCAA), a heavyweight wrestling championship. As of 2016, Lesnar is WWE's second highest-paid wrestler after John Cena. Brock is also an active member of the National Rifle Association.

Brock Lesnar was born on 12 July 1977 in Webster, South Dakota to Stephanie and Richard Lesnar. He was raised in his parents' dairy farm in Webster. He belongs to German descent.

He studied at Webster High School. While in the school, he was keen on playing football and amateur wrestling.

Lesnar started his professional career signing a deal with the World Wrestling Federation (WWF) where he met his future friend and manager Paul Heyman.

At the age of 25, he on the WWE Championship five months later his debut becoming the youngest champion in the title's history.

Also, he was the King of the Ring in 2002 and the Royal Rumble winner in 2003. Following the match with Goldberg, he left WWE and joined the National Football League (NFL) in 2007.

In 2006, he started his career in mixed martial arts. He signed a deal with Hero's and won his first fight against Min-Soo Kim in June 2007. He made a comeback in wrestling in April 2012 rejoining WWE after eight years break. In 2014, he defeated The Undertaker ending his undefeated streak at Wrestlemania.

He had a deal to fight with the Ultimate Fighting Championship (UFC) in October 2007. He made his UFC career debut against former UFC Heavyweight Champion Frank Mir in an event called UFC 81: Breaking Point.

He notified UFC that he's retiring from MMA for the second time in February 2017.