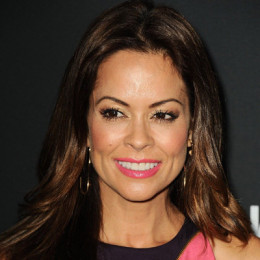 Brooke Burke Charvet is an American dancer, model, actress, and a television personality. She is best known for her role in Rock Star. She has won Dancing with the Stars. She won a beauty pageant at the age of 14.

Brooke Burke announced in 2012 that she had thyroid cancer and went through a surgery. In 2002 she was included in 102 Sexiest Women in the World.

And again in 2005, she was one of the 100 Sexiest Women in the World. She is the CEO of ModernMom.com. For three years from 2011-13, she continuously hosted Miss America Pageant. She has also been listed as the hottest women of films and TVs.

There is nothing like a brother sister love. this one fills my love cup every time @big_wizdom my little bro with the biggest heart! Nothing compares to family #thingsthatmatter MOST! #family Burke

She has two daughters Sierra and Neriah with her first husband, Garth Fisher. The two separated with a divorce in 2005.

She started dating actor and singer David Charvet in 2006. The couple has a son name Shaya Braven and a daughter named Heaven Rain.

The pair announced their divorce in April 2018 after seven years living as husband and wife. Also, she is seeking joint legal and physical custody of their two children.

"You may have heard that David and I are divorcing. We have tried to keep our separation private for some time out of respect for our children and family. Although I believe this is a positive change, I am deeply saddened because I loved being married. It took me a long time to differentiate between giving up and letting go, and even longer to recognize when it was time to do so. We are still a family full of love, simply redefining our dynamics.

"I believe this is a necessary decision for my entire family unit."

As per the court documents obtained, she listed their date of the split as 23 January 2018.

Brooke Lisa Burke was born on 8 September 1971 in Hartford, Connecticut. Her mother’s name is Donna and her father’s name is George. She attended Sahuaro High school and after that, she joined Palo Verde High School. Then after she studied broadcast journalism.

She is best known as a Playboy model and host of Wild On!, Rock Star. She is the winner of the seventh season of Dancing with the Stars.

After having divorced with her first husband she again married an actor, model, musician and a builder. She is happily married till date.

Her first husband was a plastic surgeon and a TV personality as well. She had married to him for five years and after that the couple got divorced.

Her first child is a daughter named Nerriah Shae Fisher who was born from her ex-husband. She was born on 11th March 2000.

Her second child is also a daughter named Sierra Sky Fisher who was born on 2nd April 2002 from her ex-husband too.

Her third child is also a daughter named Heaven Rain Charvet who was born on 8th January 2007 from her present husband.

Her fourth child is a son named Shaya Braven Charvet who was born on 2008 5th March. He was born from her present husband.