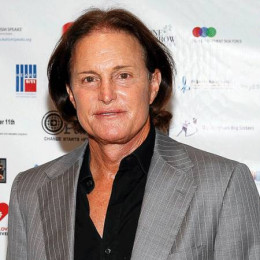 Bruce Jenner, known now as the famous Caitlyn Jenner is a famous television personality as well as a previous Olympic decathlon champion for men's event in 1976. Addressed as a woman, she is probably the world's most famous transgender woman who has openly come out.

Bruce Jenner aka Caitlyn Jenner is currently in a romantic relationship with Sophia Hutchins. His partner, Sophia is a transgender and now serves as the director of Caitlyn Jenner Foundation.

Sophia Hutcher is 46 years younger than Caitlyn  Jenner. On April 3, 2019, the transgender couple just celebrated Sophia's 23rd birthday. Meanwhile, they paid tribute to each other on social media.

Jenner has been married thrice. Recently her change into a woman had been rumored from a long time ago and the change was highly publicized by the media. He has six children of his own and four stepchildren. Kendall and Kylie are his famous daughters and Kim, Kourtney, Khloe, and Rob Kardashian are his famous stepchildren who all-star in the reality show Keeping up With the Kardashians.

Bruce married Chrystie Scott from 1972 to 1981. They have two children; Burton Jenner and Cassandra Marino. After living together for about nine years, they called it quits. Their divorce was finalized in January 1981.

She was born as William Bruce Jenner to mother Esther McGuire and father Hugh Jenner. He was diagnosed with dyslexia as a child and went on the become one of the most famous celebrities in America.

Bruce's first wife was Chrystie Scott with whom he has children Burton and Cassandra known best as Burt and Casey.

Actress Linda Thompson was Bruce's second wife. they have two sons Brandon and Brody who have acted on the reality shows The Princess of Malibu and The Hills.

Kris Houghton formerly known as Kris Kardashian was Jenner’s third wife. They got married after dating for five months. They have two children Kylie and Kendall who are both successful models. Bruce was also the step father to famous celebrities Kim, Kourtney and Khloe who are the daughters from Kris’s previous marriage. The entire extended family starred in the reality series Keeping Up with the Kardashians.