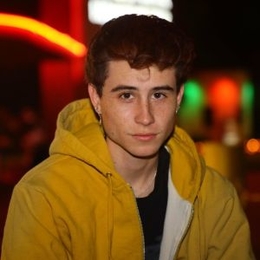 Caden Conrique is an American actor & dancer who came to prominence after becoming a member of the Chicken Girls in 2017. Caden also starred in the music videos for Danielle Cohn, Mackenzie Ziegler, and Johnny Orlando.

Who is Caden Conrique Dating?

Caden Conrique is possibly single at the time being. The American actor hasn't been romantically linked with any lady ever since he broke up with his ex-girlfriend. Caden previously dated YouTuber and TikTok star Madison Lewis in 2017. 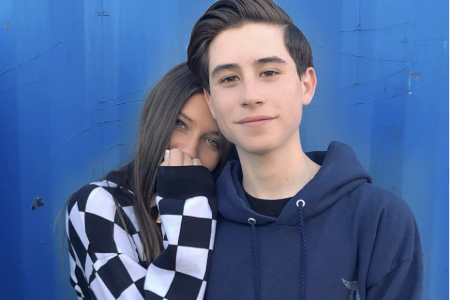 Additionally, Caden and Madison have known each other since they're super young. The former couple constantly shared photos of one another and mentioning each other in posts.

Not to mention, Caden also teamed up with Mads Lewis for a hysterical makeup challenge. Likewise, he posted a video, 'I got her a ring!!' to show his true love for his girlfriend. Unfortunately, Caden and Madison broke up in the fall of 2018 due to some unknown reasons. 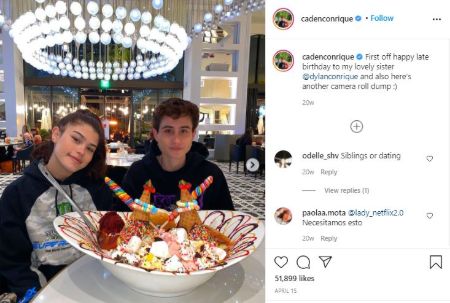 Moving on, Caden is pretty close to his family and never shy away to flaunt them on his social media platforms. What's more, Caden's little sister Dylan Conrique is also a rising actress who starred alongside him in Chicken Girls.

Caden Conrique is a popular Television star who has appeared in a handful of shows. This actor gained fame after his incredible portrayal of Tim in the digital media network's Brat's series Chicken Girls from 2017 to 2019.

Check out the video of Caden Conrique & his sister Dylan Conrique watching their old videos.

The latest movie Conrique worked for was the role of Max in 2019's comedy short film 'How Clause Ruined Christmas. Caden also played few minor roles in a couple of movies; 'Weird Wild Wonderful Days of School' and 'House of Darkness' in 2016.

Looking at his success rate, the guy probably earns around $80,000 annually as a new actor in the US. Caden established his name in Hollywood at such an early age and made himself financially stable. However, the exact figure of his net worth is yet to be revealed.