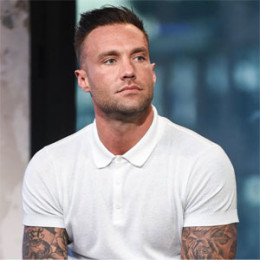 Calum Best, 36, is widely recognized as British American television personality. He made his first TV appearance in 2006 on ITV's Celebrity "Love Island." He is also known for his appearance in Celebrity "Big Brother" in 2015.

Calum Best was born as Calum Milan Best on February 6, 1981, in San Jose, California, the United States to Angie Best and George Best. Both his parents are well-known personality as his mother, Angie Best is an English model and father, George Best is a footballer from Belfast, Northern Ireland.

Best grew up in Los Angeles. He lost his father in 2005 when he was 24 years old. He holds American nationality and belongs to the White ethnicity.

Calum Best made his first TV debut in 2006 with the  ITV's Celebrity show, Love Island and won the show. The same year, he featured in the  ITV2 series Calum, Fran and Dangerous Danan, where he was seen traveling from Texas to Los Angeles on America's U.S. Route 66.

In late 2006, he launched his fragrance brand, Calum later he launched his second men's fragrance, Best. In 2008, he appeared in the  RTÉ's Livin' With Lucy. The following year, he served as a guest judge in reality television show Paris Hilton's British Best Friend.

Calum Best, 36 is possibly single at the moment, but previously he dated UFC Octagon girl, Lindsey Pelas. She is a former Playboy model. As per the source, Best dumped her before participating in Celebrity Big Brother.

In 2016, he had an intimate relationship with his Love Island co-star Jessica Shears. However, they broke up after few months of romance.

Recently, he was seen hanging out with the model, Lindsey Lou but the duo hasn't confirmed anything about their relationship.

British-American model, Best has an estimated net worth of  $8 million (£6.5 million). He charged a huge amount of fee for his appearance on TV shows because of his increasing popularity.