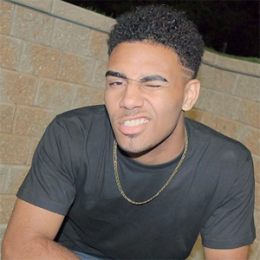 American rapper and a YouTuber, Campaign Vier has more than 30k subscribers in his self-titled YouTube channel. He is also on SoundCloud where he has 11.7k followers.

Campaign Vier was born on 6th December 1997 in Chicago, Illinois. He is American and belongs to African-American ethnicity. His parents raised Vier along with his younger sister and a younger brother.

Currently, his channel has more than 30k subscribers. Among all his uploaded videos, he is popularly known for his song Pretend ft. Golden & Nesto andTrey. Besides YouTube, he is equally famous in SoundCloud where he has 11.7k followers.

Campaign Vier hides much of the information about his private life from the media and audiences. But he has made pretty clear about the kind of girl he wants as a girlfriend.

He once took on Twitter to describe what kind of girl she wants. He tweeted,

If my girlfriend mad at me I won’t talk my way out of shit… I’ll use my tongue instead.

But as of now, he stopped posting any types of status due to which he was rumored to be in a relationship. Apart from this, he was also rumored to be gay. Till now, he has not given clues regarding his sexuality.

Vier is a good friend of an Instagram star, Shari Maire Alston.

The 19-year-old young rapper, Campaign Vier's net worth is not yet public, but it is assumed to be a six-figure digit.

A You Tuber earns $100 for 1000 views. Vier, however, has average views of 170k, i.e., $17k per video. He also has an account on various other social media from where he also makes some portion of the amount. He has 708k followers on Instagram and $14.8k followers on Twitter.

Vier is working very hard to build his career as a social media star, so, definitely his net worth will increase in the coming future.