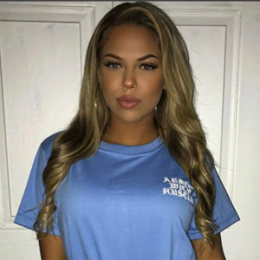 American Instagram star, Sharie Marie Alston is known for her posts related to the fashion, singing, and dancing on her social media. She got much fame after appearing in the music video, Loud Pack.

Sharie Alston was born Sharie Marie Alston on 14th April 1998 in the United States. She is American and belongs to Mixed ethnicity(half Black-half White). Her brother, Kevin is a musician.

She attended Cardinal Spellman Catholic School. With interest in dancing, she joined LaGuardia. From the very early age, Alston was also interested in singing.

The 19-year-old Instagram star, Alston, gained fame at a young age through her Instagram and Vine accounts. Before becoming a famous social media star, she appeared on a video named, Loud Pack by Tory Lanez and Dave East. The video has earned more than 2 million viewers to date.

Her popularity rose through Vine, and before it shut down, she had 20,000 followers. Later Alston became more active on Twitter, Instagram, and SoundCloud posting pictures and videos of herself singing and dancing.

At present, Alston has more than 232k followers on Instagram and more than 38.9k followers on Twitter. Her self-titled YouTube channel has 4.7k subscribers. She usually uploads videos related to fashion.

Shari Alston is single at present. Despite being a social media star, she has kept her love life and affairs away from the limelight. However, there was a rumor about her dating a boy whom her brother used to hate.

Alston has said she is highly influenced by divas like Rihanna, Beyonce, Jhene Aiko and Kyle Jenner (inspired her in grooming). She has an open definition of beauty, and she thinks that beauty has no specific size and shapes. Alston stated,

‘’ What makes you different and realize that it’s unique not “ugly.” You’re your own person and that’s it!’’

Alston even suffered from anorexia. After facing difficult circumstances due to anorexia, she suggests everyone give priority to their health.

She is a close friend of American YouTube star, Campaign Vier.

Shari Alston earns much of her money from her posts on her social media. She has thousands of followers on Instagram, Twitter, and YouTube. However, her exact figure of net worth is not public.

Other social media star like Sam Ushiro earns $20,000 per month with 273k followers on Instagram. Alston also has followers close to that number, so it can be assumed she makes somewhere around that figure.

As per Alston, she plans to get more fan following on social media,  she is aiming to reach the top in the coming five years. To be the top most followed person on Instagram, Alston would have to beat the following big names in the bucket.