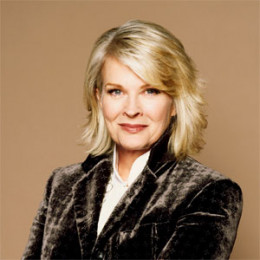 The five-time Emmy Award winner for the CBS sitcom, Murphy Brown actress, Candice Bergen is a former model. She is one of the finest actresses of her time who started her career as a model before entering in the acting field. The highest paid actress of her time, Candice did numerous movies and series until today. As of now, Bergen is happily married to her second husband after the death of her first husband due to cancer.

The former fashion model, Candice Bergen was born as Candice Patricia Bergen on 9th May 1946 in Beverly Hills, California. She is the only daughter of her parents, Frances Bergen, former powers model and Edgar Bergan, a famous ventriloquist and an actor.

She is an American and belongs to the White ethnicity. Taurus is her birth sign. She grew up along with her elder brother, Kris Bergen in a well-established family.

Talking about her academic qualification, she attended the University of Pennsylvania where she was selected for Miss University and Homecoming Queen. Due to which she could not concentrate on her studies and failed to graduate.

Bergen started her career as a model and featured on the covers of many magazines including Vogue. Along with modeling, she was also involved in acting as well. She made her screen debut from the film, The Group in 1966 directed by Sidney Lumet with the role of a university student.

During the same year, she also worked in another film, The Sand Pebbles with the casts Steve McQueen, Richard Attenborough and others which was nominated for the Academy Award. Among all her movies like Live for Life, The Hunting Party, Soldier Blue, Home Again and many others, she was praised for her role in the movie, Starting Over.

Apart from the movies, she also appeared in many TV series among which Coronet Blue is one of her first series where she played the role of Enid Toler. She even got much of the appreciation for the series including Murphy Brown and Boston Legal.

She won some of the prestigious awards like Emmy Awards(five times), Golden Globe Awards, Television Academy Hall of Fame Awards and many others.

Candice Bergen married Louis Malle in 1980 in the French countryside, Louis’s family estate after dating for only six months. The couple had an instant connection, so they did not take much time to exchange their vows.

Few years after the marriage, the couple became parents as Bergen gave birth to their first child and named her Chloe in 1985.

Everything was going fine until, the year 1995, when he passed away at the age of 67 from cancer leaving his wife on the Thanksgiving Day. She faced trouble after the death of her husband and was devastated.

She remained single for years until she finally found a perfect partner to start a new life. Unexpectedly the romance returned to her life in June 2000 after marrying the real estate developer, Marshall Rose at the age of 54. Today it’s been years of their marriage and the couple is happily living together.

Bergen revealed some news about her dating life in an interview in the show, The Daily Show with Trevor Noah which became one of the highlighted stories. She stated that she once dated the present president of the US, Donald Trump during her college time. She further added that the pair went on a blind date where he tried to hit on her even knowing about her boyfriend.

The highest paid actresses in the Hollywood of her time, Candice Bergen currently has an estimated net worth of $25 million. Her works in many magazines, movies, and series helped her to earn such an amazing money. She is today living a lavish life along with her husband in their house in California.

Candice got married to her first husband, Louis Malle ( a French director) in 1980 at his family estate. Tha pair also had a child together as well. But the happiness turned into sadness after the death of Louis due to cancer in 1995.

Philanthropist, Marshall Rose is the second husband of Candice with whom she got married in 2000 at the age of 54. The couple is still together and living a happy life but has no children.

Five years after the marriage of the couple, they finally welcomed their first child and named her as, Chloe Malle in 1985. After the death of Louis, Candice is taking proper care of their daughter.