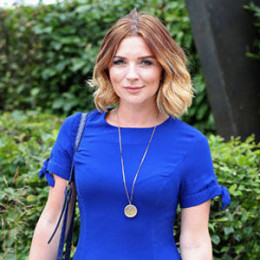 The winner of the seventh season of The Great British Bake Off, Candice Brown was a PE teacher at Ashlyns School in Berkhamsted before pursuing a career in baking. As of currently, she is a participant in the tenth series of Dancing on Ice on ITV. Brown is engaged with her longtime boyfriend.

Candice Brown was born on 21st December 1984 in Bedfordshire, England. She is British and belongs to White ethnicity. Her parents, pub owners, raised Brown along with her brother.

Brown studied at Mark Rutherford School and later graduated from the University of Birmingham. Before beginning her career in TV, she used to work as a physical education teacher at Ashlyns School in Berkhamsted which she left to pursue a baking career.

Her journey began in baking after participating and winning a British television baking competition named, The Great British Bake Off, judged by Marry Berry, Paul Hollywood, and Prue Leith. She rose to fame after winning the title in 2016.

Later on, she appeared on the ITV daytime show, The Morning occasionally as a cook. As of November 2017, she took part in the tenth series of ITV’s Dancing on Ice partnered along with Matt Evers.

The gorgeous baker, Brown got engaged to her longtime boyfriend, Liam Macaulay in 2016 after dating since 2012.

Her fiancé, Macaulay surprised her with the ring which he hid in the gloves compartment of the car, and as soon as they reached their destination, he popped the question. They're yet to make plans for their wedding.

The 32-year-old TV personality, Brown might collect a genuine amount from her career. As the winner of 2016 The Great British Bake Off, she is expected to make £1million in endorsements. She also got a job with world's top pastry chef. Considering all these she probably has a net worth of around seven figures.