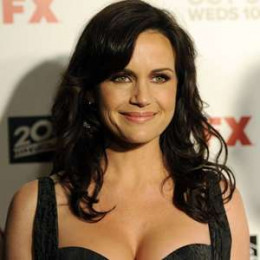 Carla Gugino is an American actress mostly known for her role as Ingrid Cortez in the Spy Kids trilogy. At the age of two, her parents separated. She was born to father Carl Gugino, an orthodontist of Italian descent and mother of English and Irish descent. She grew up with her father. Carla worked as a teenage fashion model and also took acting classes. She appeared in television shows including ALF, Doggie Howser, M.D, and Saved by the Bell.

Carla Gugino,48, kindles an amazing chemistry with her lover. The actress shares a screen with her beau in the 2019 action crime drama series Jett.

Gugino has been in a lovey-Dobey relationship with her longterm partner a Venezuelan director for over fourteen years now. Gugino and Sebastian Gutierrez are dating since 2005.

The Haunting of Hill House actress is fiercely protective of her privacy therefore she hasn't mentioned anything about their plans regarding marriage. Except for that, she is very close to her male co-stars including #jwuntitled.

How Rich Is Carla Gugino?

Carla Gugino, an American actress has an estimated net worth of double-figure millions. She pockets big bugs from her profession. Thanks to her career as an actress ad fashion model.

Speaking of lifestyle, she lived with her dad in a beautiful house with a swimming pool and a tennis court. Carla often visits Europe for the summers. She resided in a tepee in Northern California and a van in Big Sur.

Carla Gugino played in the film "Troop Beverly Hills" and 1993 romantic comedy "Son in Law" co-starring with Pauly Shore. After that, she also played in the music video for the song "Always”. Carla has worked in two short-lived series including ABC’s crime drama Karen Sisco.

Prior to chasing a career in the film industry, Gugino, she worked as a teenage fashion model. Later, she took acting classes at the suggestion of her aunt, Carol Merrill.