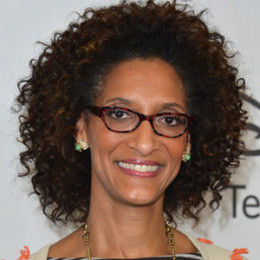 Emmy winning chef, Carla Patrice Hall is a popular American chef, former model, and television personality, best known as the finalist of Top Chef, Bravo's cooking competition show (Season 5 and 8). Currently, she is one of five co-hosts on The Chew, a one-hour talk show focused on food.

Carla Hall was born on May 12, 1964, in  Nashville, Tennessee to Audrey Hall. He is American and belongs to the White-American ethnicity. She has a sister named Kimberly Hall.

She attended Hillsboro High School. Later, she graduated from Howard University's Business School in 1986 with a degree in accounting.

She then worked at Price Waterhouse in Tampa, Florida and became a Certified Public Accountant but after two years she left the job.

Carla Hall was a model before pursuing her carer in modeling. In 1988, she walked ramp walk for Paros, Milan, and London. These three cities bring interest in food and art. She used to bring leftover sandwiches to her friend's office which inspire her to start a lunch delivery service called the Lunch Bunch.

After four years, she joined L'Academie de Cuisine in Gaithersburg, Maryland, and graduated with a Culinary Career Training certificate. Later, she did an internship at the Henley Park Hotel, where she was then promoted to sous chef. She served as the executive chef at the Garden Cafe in the State Plaza Hote and at a  private social club, Washington Club.

In 2001, Carla Hall began her own catering company, Alchemy Caterers. In 2008, she gets her first big break after getting selected on the fifth season of Top Chef. She ended the show as a runner-up but gained international popularity.

She then co-hosts the one-hour show on ABC, The chew which the first episode was aired on September 26, 2011. In 2014, she launched a campaign to raised funds for her restaurant and by June 17, 2016, she opens up her own restaurant, Carla Hall's Southern Kitchen in Brooklyn, New York.

Carla Hall is a renowned American chef. She has an estimated net worth of $2.5 million. She generates a million from her show and restaurants.

Carla Hall is happily married to his longtime boyfriend, Matthew Lyons. The duo exchanged the vow in 2006 and since then they are together. The duo is the proud parents of a son, Noah Lyons. She currently resides in Washington, D.C. along with her family. 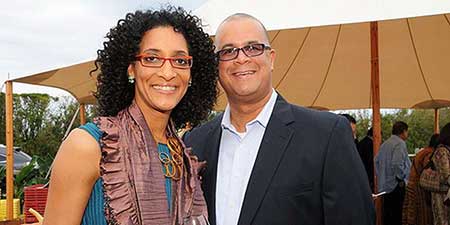 Carla Hall with her husband.

IN 2009, she featured on the cover of the Washington Post Magazine on "Fit for Fame". She also portrayed a version of herself, "Spaghetti Scientist Carla Hal"l in the BoJack Horseman episode, That Went Well.

Carla Hall lends her voice in a season 2 episode of Disney Junior's The Lion Guard titled "Ono and the Egg" as a Mpishi the harrier hawk.

He is the one and only beloved husband of Carla, who by profession is a Lawyer. They are married since 2006.

He is the stepson of Carla, whose date of birth and current status is unknown.