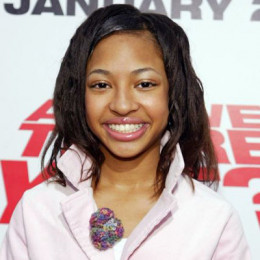 Aleisha Allen is one of the members cast besides Black Jack in the "School of Rock" movie. She has gotten into many nominations for young artist awards and other similar awards, and has won one with her team for "School of Rock." Regarding the years she has left for her career, she has more to contribute and achieve. The star is making an amazing net worth and salary from her career.

Allen was born on April 28, 1991, to mother Angela LaNaé Allen and father Otis LaNaé Allen in Bronx, New York, the USA under the birth sign Taurus. She went to the Professional Performing Arts school in Manhattan.

Allen was interested to be the part of the entertainment world since childhood and made her Hollywood debut at the age of four as a print model.

Allen rose to fame as a child actor when she appeared as Sidetable Drawer on the children's television series Blue's Clues at the age of five.

She was also one of the main casts of the Playhouse Disney series Out of the Box alongside Tony James, Vivian Bayubay, Celine Marget, and Brandon Zemel. Both of the shows were kids friendly which made Allen their idol.

She also appeared in the popular 2003 comedy movie School of Rock directed by Richard Linklater as Alicia one of the children of the band alongside Jack Black.

She received MTV Movie Awards nomination for Best On-Screen Team for the film. Her next big venture was the comedy film Are We There Yet and Are We Done Yet? alongside Ice Cube, Nia Long, Tracy Morgan, and Philip Daniel Bolden.

Some of her other popular works include The Best Man, Blue's Big Musical Movie, The Electric Company and so on. As of 2018, she is not active in the film industry and stays away from the limelight.

Allen's net worth is estimated to be in millions. Her main source of income is her acting career but having said that she was also a model.

Allen lives a very low key life and prefers to stay away from the limelight. As of 2018, since she has not revealed about her dating life to the media, she is assumed to be single.