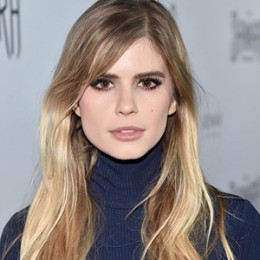 Carlson Young is known for the role on Disney Channel's As the Bell rings, the film Premature and Comedy Central's Key & Peele, and for her role as rookie Maddox in the main cast of MTV's Screen. Carlson is currently a senior at the Fort Worth. Innovative Artists, Jennifer Patredi, Agent Kritzer Levine Wilkins Griffin are some of the talent agency she has worked with. There is no information about her parents or her childhood or her siblings or her education.

Carlson Young is engaged to Foster the People member and producer Isom Innis. They started dating on 2013 and after two years of relation, they got engaged in 2016. Isom proposed her in Iceland and landed for their marriage date. They have chosen the month of April of 2017 for their marriage. Before Isom, she has had 5 public relationships. She had dated Brian Patrick Kehoe in 2007, Tony Oller from 2008-2009, Justin Gaston from 2009-2010, Chord Overstreet in 2012 (rumour), and Lucas Till from 2012-2013.