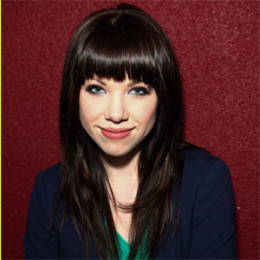 Carly Rae Jepsen, 31, is a Canadian singer, songwriter, and actress too. She rose to fame in 2012 with her single "Call Me Maybe" which reached the top in 18 countries. Her dedication towards music and outstanding performance helped her to win Billboard Music Award. Jaspen is romantically involved with her long-time boyfriend, David Larkins.

Born on 21 November 1985, Carly Rae Jepsen is the daughter of Alexandra and Larry Jepsen. She is the second child of her parents and raised along with her siblings; sister, Katie Jepsen and a brother, Colin Jepsen in Mission. Nationality-wise, she is Canadian and belongs to the Mixed ethnicity of Danish, English, and Scottish.

After he parents divorced, she started living with her mom and step-dad, Ron Lanzarotta.

Jepsen joined the Heritage Park Secondary School in Mission where she nurtured her passion towards music and theater. She appeared in various student productions by Annie, Grease and The Wiz as the main lead. Later she attended the Canadian College of Performing Arts in Victoria, British Columbia, studying musical theater.

She used to work as a barista and pastry chef assistant after her graduation, writing songs during her leisure time.

Carly Rae Jepsen's musical journey began when she decided to participate in the fifth season of 'Canadian Idol' auditions in 2007. She secured 3rd place in the show and got a chance to perform in the Canadian Idol Top 3 concert tour.

Jepsen released her debut single ‘Sunshine on My Shoulders’ in June 2008, a cover of John Denver's song. The same year, she launched her debut album, Tug of War and received nationwide recognition. The album sold over 10,000 copies in Canada and her singles ‘Tug of War, ’ and ‘Bucket’ both reached in top 40 of the Canadian Hot 100.

In 2009, she released her single, Sour Candy, with Josh Ramsay of Marianas Trench. She rose to stardom in 2011 after her song, Call Me Maybe. The song was number one in 18 countries and viewed more than 1 billion times on YouTube till date.

Later, Jepsen was signed by School Boy Records, an Interscope-affiliated record label. In 2012, she came up with her second album, Kiss which sold 289,000 copies in the US and certified gold by 'Music Canada'.

Her third album, I Really Like You, released in March 2015, featured the American actor Tom Hanks. The same year, she released her next album titled Emotion which peaked at the eighth position in Canada.

Jepsen took a break from the music industry and enrolled herself in Broadway. She was offered a role in the renewed version of Rodgers and Hammerstein's ‘Cinderella’ for the main lead which she portrayed perfectly.

In 2016, she performed in the TV special ‘Grease: Live' and lent her voice to an animated movie, Ballerina. Jespen has appeared on several television shows such as; Late Night with Jimmy Fallon and The Ellen DeGeneres Show. In 2016, she launched her clothing and footwear brand named Candie's and became its spokesperson.

Jepsen received Rising Star Award for Billboard Music Awards in 2012. Following year, she won three consecutive awards at Juno Awards 2013 for her album, Kiss in the category of  "Album of the Year" and "Pop Album of the Year" whereas "Call Me Maybe" won Single of the Year.

She also succeeds to get her first nomination at the 55th Annual Grammy Awards. In 2016, she got nominated for the Fan Choice award at the Juno Awards.

Carly Rae Jepsen is in a romantic relationship with her photographer boyfriend, David Kalani Larkins. The duo is together since 2015 and shares a healthy relationship.

Previously, she dated her fellow pop star, Matthew Koma in 2012 but the couple called it quits in 2014 in mutual understanding. She was also linked to Jodi Ashworth, but both of them never spoke on it. Jepsen is an active gay rights activist.

Call Me Maybe fame singer, Jepsen is the rising superstar who has earned massive popularity in short span of her career. On monetary terms, she has an estimated net worth of $10 million. The source of her income is singing, songwriting acting.

She owns a car, Fiat 500l which cost around $20 thousand. She is a brand ambassador of Candie's Foundation which adds more to her income.