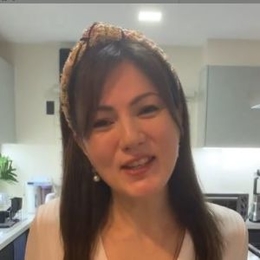 Carmina Villarroel is a Filipina actress, businesswoman, and former model best known for her acting skills in popular films like Bopo Cop, Pinulot Ka Lang Sa Lupa, Tinyank, and Magic of Love. Besides, she is also a wife and mother to twins.

Carmina Villarroel previously walked down the aisle to Bibina Gandanghari in 1994. Carmina doesnt share any child with Gandaghari. Further, Binibibi, aka BB, is a Filipino model, director, comedian, and television series star who presented Wheel of Fortune on ABC 5. 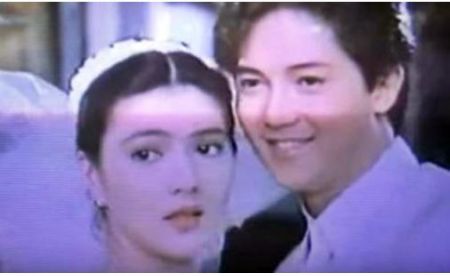 Carmina Villaroel with her ex-husband BB Gandanghari on their wedding. SOURCE: Pinterest

The pair enjoyed a happy married life for almost four years until Bibiana filed for divorce and an annulment which got granted in 1997. After several years, they finalized their divorce in 2002. The reason behind the failure of marriage was rumored to be Gandaghari's gender preference.

Following a split from Carmina, Gandaghari came as gay on Pinoy Big Brother: Celebrity Edition on March 2, 2006. In 2009, Gandaghari then came out publicly as transgender and chose to undergo gender confirmation surgery.

After the divorce, Carmina exchanged the vows with her boyfriend turned husband, Zoren Legaspi on November 15, 2012. The surprise civil wedding ceremony was aired as the television special Zoren-Carmina: Always Forever, A Wedding like No Other. 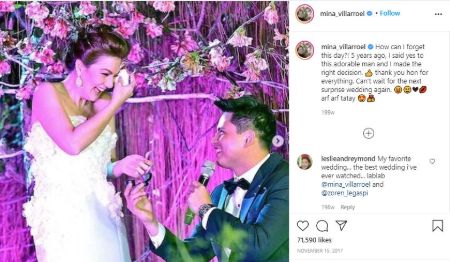 In November 2017, Carmina reminisced their surprise engagement and wedding with a photo in which Zoren gets on his knee with a ring while she looks ecstatic with joy. She marked the fifth wedding anniversary on Instagram & captioned it with a sweet message, "Nov 15, 2012. Always, Forever- A Wedding Like No Other. Happy Wedding Anniversary Honey."

Likewise, Carmina with Zoren welcomed twins- Cassandra Legaspi & Maverick Legaspi. Both of the children arrived on January 6, 2001, in the United States. 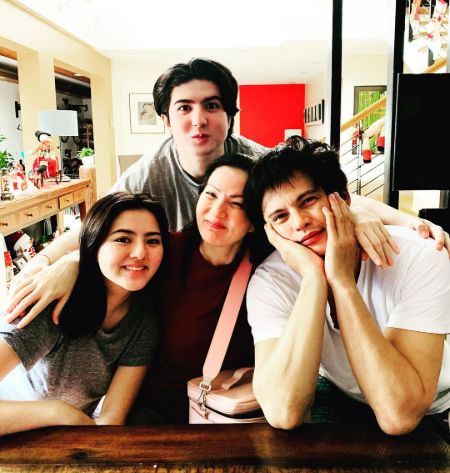 Carmina Villarroel posing for a camera with her family. SOURCE: Instagram(mina_villarroel)

All in all, Carmina, a supportive wife & proud mother, takes proper care of her two grown-up kids & prefers to spend a lot of time with her family. Carmina's Instagram feed is also showered with images of her current husband & children.

Carmina Villarroel started her career as a model and ventured into the showbiz industry in 1986. Villaroel first appeared in the world of Philipines' showbiz with Jollibee TVC in 1986. After a year, she was seen via Regal produced film' Pinulot Ka Lang as Lup.

Check out the video of Carmina Villarroel's family having a fun time.

Not to mention, Carmina is also a cast of GMA Network broadcast the television series Babawiin ko and Lahat that premiered on February 22, 2021. Some popular films of Mrs. Villaroel are Bopo Cop, Magic of Loveand Pinulot Ka Lang Sa Lupa, Tinyank.

Other than being a TV Series actress & model, Carmina is also a YouTube Star. She garnered over 393 thousand subscribers with over 800 million views in total as of 2021. Some of her videos on her self-titled channel include- Trip to Maya-Maya, Father's Day with the Villarroels, Sagot o Lagos? and Surprise Unboxing Vlogs.

From her career, Carmina has summoned the astonishing $1 million. Carmina's wealth is, infact, growing significantly. The main source of income for Carmina is her profession as an actress & business venture.

Binibini Gandaghari is the first husband of Carmina Villarroel. The actress married Gandaghari in 1994 but got divorced in 2002.

Carmina Villarroel enjoys a blissful marital life with her boyfriend turned husband, Zoren Legaspi. They are proud parents to twins.

Cassandra Legaspi is one of the twins born to mother Carmina Villarroel and father Zoren Legaspi in 2001.

Maverick Legaspi is one of the twins born to mother Carmina Villarroel and father Zoren Legaspi in 2001.