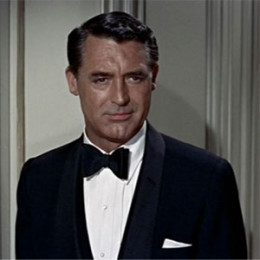 A British-American actor, Cary Grant was one of the popular actors of his time who acted in more than 76 films and for which he was nominated twice for an Academy Award as the Best Actor. He was also known as one of the Hollywood�s top box-office attraction over almost 30 years. The famous leading man, Grant who died in 1986 was married for five times and also had a daughter.

Cary Grant was born Archibald Alec Leach on 18th January 1904 in Bristol, England. He is the second child of his parents Elisa James Leach (1873-1935) and Elsie Maria Leach (1877-1973) after his brother, John William Elias Leach who died in 1900 of tuberculosis meningitis. His father was an alcoholic and mother suffered from clinical depression.

His mother taught him to sing and dance. During that time, she used to take him to theaters to watch the performances of many great personalities including Chester Conklin, Fatty Arbuckle, Charlie Chaplin, Mack Swain and others.

He attended the Bishop Road Primary School in Bristol, then joined Fairfield Grammar School after getting a scholarship, but his father could not afford his uniform for the school. He was interested in sports and other activities rather than in studies.

In 1919, he was expelled from school after various allegations including going to girl’s lavatory, assisting his mates to steal but even after many accusations; it came out that he intentionally got expelled to pursue his career in acting.

From the early age of 13, he started to act in some of the local plays. He then re-joined the Pender Troupe after being expelled from school with the salary of 10 shillings a week. He with his team toured almost for two years. During the visit to New York, he left the group to begin his solo career.

By the late 1920s, he made several appearances on the Broadway. He was also selected for the casts of Australian in Reggie Hammerstein’s musical, Golden Dawn with the salary of $75 per week.

A few years later in 1931, he appeared as a lead in the musical Nikki with Fay Wray with a role of a soldier. His impressive performance landed him another role in the short movie, Singapore Sue.

With many years of studio experience, he shifted to Los Angeles and signed a contract with Paramount Studios. After the agreement, his actual journey began and even changed his name to Carry Grant. In 1932, he made debut from This Is The Night alongside the casts Thelma Todd, Lili Damita, Ronald Young, Charlie Ruggles and Irving Bacon.

Moreover, he also got an opportunity to share the screen with Marlene Dietrich in Blonde Venus by Josef con Sternberg at the initial phase. From the late 1930s, he became one of the leading actors in the Hollywood working in several genres of movies from horror to comedy.

Grant gained, much of the popularity after the movie Topper. Some of his greatest film of that time includeThe Awful Truth in 1937 (starring Irene Dunne, Ralph Bellamy, Molly Lamont, Cecil Cunningham, Alexander D’Arcy and so on), The Philadelphia Story in 1940 by George Cukor. In 1941, he got a chance to work with a master of suspense director, Alfred Hitchcock opposite Joan Fontaine.

In the same year, he also appeared in the movie, Penny Serenade for which he won a nomination for an Academy Award. In 1944, for his performance in None but the Lonely Heart by Clifford Odets got him nominated for a second Academy Award.

In 1963, he teamed up with Audrey Hepburn in the thriller-comedy Charade starring Walter Matthau, James Coburn, George Kennedy and so on. In 1966, he retired from filmmaking after working in Walk Don’t Run by Charles Walters.

After leaving acting, he became the director of the Faberge Company formed by St. Petersburg in 1842. He then, became involved in many business purpose activities including investing in shares, engaging in real estate business and others.

Also, he was appointed as a BOD of MGM (Metro-Goldwyn-Mayer) in the field of film and hotels. He even became the director of Hollywood Park (an American gaming and hospitality company), Western Airlines and the Academy of Magical Arts.

Cary Grant was married for five times and went through four divorces. Most of his relationship ended because of his controlling nature.

In 1934, Grant married Virginia Cherrill, an American actress at Caxton Hall in the registry office in London. But the relationship ended in 1935 and Cherrill even filed a case against him for hitting her. The divorce became the highlight news of the time as Cherrill demanded $1000 a week from her husband from his paramount earning.

After his first divorce, he dated Phyllis Brooks, an American actress and a model in 1937. They were even planning for the marriage and went on vacation as well. But they separated for some unknown reasons.

Grant again tied the knot with Barbara Hutton, one of the wealthiest women of the time in 1942. After the marriage, he was accused of marrying her for the sake of money due to which he took no financial support after their divorce.

On 25th December 1949, he married for the third time with his co-star in many of the movies, Betsy Drake. They ended their relationship in 1962.

Dyan Cannon is his fourth wife. They got married in 1965 in his friend Howard Hughes’ Desert Inn in Las Vegas. Grant became the father for the first time from his fourth wife, named her, Jennifer and called her as his best production.

Cannon was the one who exposed about Grant's possessive nature and said that he used to tell her what to wear and not to wear. She even explained that she was forced by him to take a drug, LSD which became the reason for their split. After the divorce, he dated an actress, Cynthia Bouron in the late 1960s. Eventually, this relationship also ended.

The separation dragged him to the court as Bouron filed the paternity suit stating that he was the father of her seven-year-old baby girl and even the birth certificate contained his name. After such allegation, Grant asked for the DNA test which came out negative, so the court ordered Bouron to erase the name from the certificate.

Grant then dated Maureen Donaldson, a British photojournalist between 1973 and 1977. In 1981, he married Barbara Harris who was 47 years younger than him. The two dated for five years before tying the knot together.

Apart from the relationships, in 1968, he faced a car accident on Los Island in which he broke three ribs and was hospitalized for 17 days.

In 1986, the world lost an amazing actor from the industry. Grant at the time was at Adler Theater in Iowa, preparing for his performance in Conversation with Cary Grant. As per the sources, he was feeling uneasy and ill when he arrived at the theater.

Basil Williams, one of the photographers at the theatre recalled that Grant rehearsed for half an hour before "something seemed wrong" all of a sudden, and he disappeared backstage. He was then taken to the Black Hawk hotel where he and his wife, Barbara had checked in. Grant refused to go to a hospital, so a doctor was called for the checkup. After the tests, the doctor discovered that he was having multiple strokes with a blood pressure reading 210 over 130.

The stroke worsened and by 8:45 pm he went to coma and was rushed to St. Luke’s Hospital. There, he was kept in the emergency for 45 minutes, and while being taken to the intensive care, he was announced dead at 11:22 pm at the age of 82.

He died of intracerebral hemorrhage, type of stroke caused by bleeding within the brain tissue itself. His dead body was taken to California where it was cremated and his ashes scattered in the Pacific Ocean.

The 6 feet 2 inches (1.87m) tall actor used to have an estimated net worth of $10 million. He was named as one of the Hollywood’s box office attraction for about 30 years.

During his lifetime, he used to have the salary of $15000 a year in 1960s which gradually increased as per the time and his popularity. Some of his top highest box office collection movies included Notorious  ($24.5 million), North by Northwest ($9.8 million), The Philadelphia Story ($3.3 million), and much more.

He also earned much in his lifetime through the various business. He owned a Palm Springs Retreat worth $13 million in 2017. After the death of the great actor, his real estate worth $60 -80 million went to his wife and his daughter.

On 9 February 1934, Cary Grant got married to his first wife, Virginia Cherrill but divorced on 26 March 1935. She was an American actress known for her role as the blind flower girl in Charlie Chaplin's City Lights.

Cary Grant married for the second time on 8 July 1942 who was one of the wealthiest women. But the couple separated on 30 August 1945.

Besty Drake was the third wife of Cary Grant with whom he got married on 25 December 1949 and later split up on13 August 1962.

On 22 July 1965, Cary Grant tied the knot for the fourth time and also had a daughter. Like his previous relationship, it also ended in divorce on 21 March 1968.

Jennifer Grant is the only child of Cary Grant who was born to Dyan Cannon on 26th February 1966. She is today an established actress and is even married and has children too.