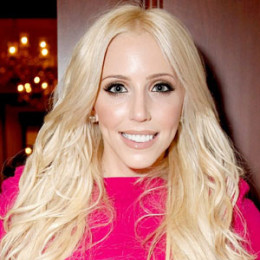 Casey Reinhardt is a reality television personality. She is widely recognized for her appearances on Laguna Beach: Cupcake Wars, The Real Orange County, and The Hills. She is also a model, actress, and entrepreneur. She competed in the Miss California Teen USA and Hawaiian Tropic Teen Miss Beauty pageants.

The multi-talented TV personality Casey Reinhardt was born on July 1, 1986, in Beverly Hills, California, US. She was brought up in Laguna Beach, California and Dana Point as the daughter of John Reinhardt and Kelly Roberts. Her step father's name is Duane Roberts.

Casey also has an older brother, Doug Reinhardt. She attended Pepperdine University, studying Psychology and Pre-Law.  She was part of the Kappa Kappa Gamma sorority.

Reinhardt also released her own lip gloss brand named "Kiss By Casey" in 2007.

Casey Reinhardt is the owner of Casey's Cupcakes, which is branded over different locations, including California, Riverside, Laguna Beach and Newport Beach as well. She was also awarded the "Walk of Fame" on Food Network's “Cupcake Wars” in 2011.

Besides, Reinhardt has also participated in a number of beauty pageants, including Miss California Teen USA in 2003, the Miss Orange County Teen USA, Hawaiian Tropic Teen Miss and many others.

Casey Reinhardt married her long time boyfriend Sean Brown. They tied the knot on 20th February 2016, at The Resort at Pelican Hill in Newport Coast, California.

They announced their engagement in August 2015, after dating for a while. The pair has a daughter named, Kensington Kelly, born on August 16, 2016.

They are now going to become parents for the second time. Casey announced her pregnancy through her Instagram account and released her family picture along with a baby bump. The husband and wife are living happily with their daughter and ready to welcome their second child.

Casey Reinhardt’s main source of the income is her journalism, acting, and modeling career. Therefore she has garnered a huge amount of net worth from her various skills that estimated to be $2 million.

She has an attractive figure with a body measurement of 33-23-33 inches. She has the gray colored eye and light brown colored hair.

In 2002 Casey Reinhardt set up the Children's Alliance for the Success and Education of Youth in Need Foundation. The foundation helps promote the importance of education and the positive effects it has on building success. Moreover, she also worked for several other charities like the Olive Crest Children's Foundation, the Orangewood Children's Foundation, and the Riverside Humane Society Pet Adoption Center.

Sean Brown is only popular because of his marriage with his wife Casey Reinhardt. The couple is currently expecting their second child.

Kensington Kelly is the daughter of Casey Reinhardt and Sean Brown.