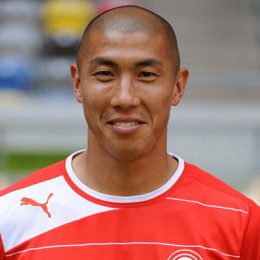 Cha Du Ri is a professional German football player. He plays as a right winger and right back. Curtly he is playing for club FC Seoul for K League Classical. His father Cha Bum-Kun was also a football player who played for World Cup 1986. His mother’s name is Oh Eun-mi. He had started playing football when he was in kinder. He had also played for FIFA World Cup.

Cha Du-Ri is a married man. In 2008 Cha had married to a daughter of a wealthy hotel manager, Shin Hye-Sung. Cha has two children from his wife, Cha A-in and Cha A-il.

But after five years long relation the couple separated in August 2012. The following year Cha filed the divorce.

Cha Du-Ri has an accumulated net worth of $2million. He made a great fortune from his football career.

He had married the beautiful Shin Hye-Sung who was quite wealthy and his married life with him was rather short than imagined.

He had two children with his wife Shin Hye-Sung and her name was Cha-A-il.She is cute and she has a sister as well.

Cha-A-in was his second daughter after Cha-A-il from his wife Shin Hye-Sung.After they divorced no information regarding the child's honour has been known.