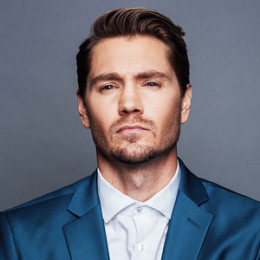 American actor, Chad Michael Murray is best known for his portrayal of Lucas Scott in the WB/CW drama series, One Tree Hill. He is also known for other movies such as Freaky Friday (2003), A Cinderella Story (2004), and House of Wax (2005). Murray is a married man and has two children. He currently resides in Los Angeles with his wife and children.

Chad Michael Murray was born on August 24, 1981, in Buffalo, New York, US. He is American and is of White ethnicity. He is the son of Rex Murray who was an air traffic controller. His mother left him when he was young. He has three brothers Rex Murray, Tyler Murray, and Brandon Murray, one sister Shannon Victoria Murray, two half-brothers, one half-sister.

Murray studied at Clarence High School in Clarence, New York. He was interested in literature and was highly involved in playing football at the time. He broke his nose in his late teen days.

Murray’s career started after he moved to Hollywood in 1999. He worked for the clients such as Skechers, Tommy Hilfiger, and Gucci.

Murray appeared as a guest in several TV roles including an episode of Undressed and Diagnosis: Murder. He came to recognition after portraying Charlie Todd on the popular TV series, Dawson’s Creek in 2001.

In 2003, Murray appeared in TV film Aftermath: A Long Way Home. He appeared in the Walt Disney Pictures feature film, Freaky Friday in 2003. He starred alongside Lindsay Lohan and Jamie Lee Curtis, among others. The following year, he played in an American TV film The Lone Ranger.

Murray received the lead role of Lucas Scott in the WB TV series One Tree Hill. The series became the channel’s biggest hit with 4.50 million viewers on the finale of the first season. He won several awards including two Teen Choice Awards.

Later, Murray and his co-stars from the series, One Tree Hill endorsed for MasterCard and K-Mart. They endorsed Cingular Wireless and the Chevy Cobalt as well. He appeared on the cover of several mainstream magazines such as Rolling Stone and People at the time.

In 2004, Murray played in the romantic comedy, A Cinderella Story. He starred alongside Hilary Duff, Chad Michael Murray, Jennifer Coolidge and Regina King, among others. The movie grossed $70.1 million at the box office despite the negative reviews.

Murray starred in the movie, House of Wax in 2005. The movie was one of his successful movies grossing $12 million in its first day of release. The movie grossed $68.7 million worldwide and earned many awards as well.

Murray briefly featured in the Iraqi War drama, Home of the Brave in 2006. He was cast alongside Samuel L. Jackson and Jessica Biel. He played Alicia Key’s love interest in her music video, Un-Thinkable in 2010. The following year, he portrayed Ethan McAllister in Lifetime’s television movie, Lies in Plain Sight.

In 2013, Murray appeared in the film, Fruitvale Station. The film won two major awards at the 2013 Sundance Film Festival. He was featured as Agent Jack Thompson in Marvel's TV series Agent Carter, and also returned for the second season.

In 2016, Murray portrayed Henry in the movie, Outlaws and Angels. He portrayed Jack in the 2017 movie, Camp Cold Brook.

Murray wrote a novel titled Everlast and released in September 2011. In 2017, he published American Drifter: An Exhilarating Tale of Love and Murder. He co-authored with Heather Graham for the book.

Murray was married to Sophia Bush on April 16, 2005, in Santa Monica, California. The couple was engaged in May 2004. They separated in September 2005. Their divorce was finalized in December 2006.

Murray started dating Kenzie Dalton following his separation from Bush. He first met his girlfriend Dalton in 2005. The pair was engaged in April but they called off their engagement in August 2013.

Murray dated his co-star from Left Behind, Nicky Whelan in October 2013. The pair stayed in a relationship until May 2014.

Following the separation, Murray started dating Sarah Roemer, his co-star from the series Chosen, in 2014. They tied the knot in January 2015. Roemer gave birth to their first child a son on May 31, 2015. They announced that they were expecting their second child in November 2016. The couple welcomed their second child, a daughter in March 2017.

Murray also owns a condo on Coldwater Canyon Boulevard in San Fernando Valley called Valley Village. He bought the house for $330,000 in 2002. The house covers the area of 1,620 square foot.

Murray married Sophia Bush on April 16, 2005, in Santa Monica, California. The couple was engaged in May 2004.

Murray started dating Sarah Roemer in 2014. They tied the knot ion January 2015. They are having a good relationship.