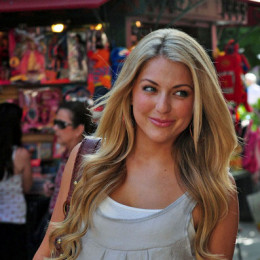 Born and raised in California, Chantelle Paige is an American singer-songwriter, actress, and travel blogger. She rose to fame as the band member of the R&B/rap group Filpsyde but later she left the band began her solo career. Paige is in a relationship with her boyfriend, Colby O'Donis.

Chantelle Paige was born on February 3, 1988, in Los Gatos, California. She is American and belongs to the White-American ethnicity. Paige was homeschooled for early education and later graduated from Valley Christian High School in San Jose, California with 4.2 GPA.

Paige was a JV Cheerleader during her freshman year and was a co-captain of the JV Girls Tennis Team. She was voted  "Senior That is Most Likely to be on the Cover of a Magazine” by her classmates.

Chantelle Paige grew up singing, acting and dancing. She also performed with the team named Dance Attack! under the supervision of  Sioux Lehner. Later, she won several convention scholarships and dance titles.

Paige appeared on the magazine covers and billboards since the age of 3. Her pictures were used on several toy boxes like Barbie, Pound Puppies, Polly Pocket and Britney Spears Doll products.

At the age of 8, a popular upscale children's catalog were made under her name, which includes a Chantelle doll and book series for which she modeled for over ten years.

Chantelle Paige began her musical journey at the age of 5. She performed in 18 different musical theatre performances at the time. She played the lead role in The Children's Musical Theater, San Jose.

Paige rose to fame after she posted a track on MySpace that became popular overnight on the site. Due to her growing popularity, she went to open for Bobby Valentino, Pretty Ricky, Tommy Lee, The Pussycat Dolls, and Robin Thicke.

In 2005, Paige signed to Interscope/Cherrytree Records by Martin Kierszenbaum. She joined the group, Filpsyde in 2003. The band released their first album titled We the People on July 12, 2005, under the label of Cherrytree/Interscope. The album made the sales of 62,000 copies worldwide.

The album consisted many tracks including a single titled Champion. The single Champion was chosen for the 2008 Summer Olympics as a theme song and as well as the primary song for EA Sports NBA Live 09 video game.

The group released their second album titled State of Survival in 2009. The album made the total sales of 50,000 copies.

Paige made a cameo in Lady Gaga's JUST DANCE music video and featured as the love interest in the music video, "I Wanna Touch You." She toured in Europe and shared a stage with many popular singers, Akon, Ciara, N.E.R.D., Kevin Rudolf, T.I., and Ludacris.

Later the band, Filpsyde was dropped by the record label and she began her solo career in 2009. She released a song, Devasted alongside Space Cowboy and Martin Kierszenbaum. Paige sang the song with Space Cowboy in Party Rock Tour for LMFAO (group) and Far East Movement.

Chantelle Paige is in a romantic relationship with her fiance Coulter Mulligan. Mulligan is the Senior Manager at GoPro and Global Social Marketing. The duo is together since their high school days and started dating in 2002.

In December 2016, Mulligan proposed Chantelle Paige with a beautiful ring and after five months couple got engaged on May 2017. Their engagement ceremony was held in the presence of their closed ones and family members. Their wedding is scheduled for May 13, 2018, which Paige announced via Instagram.

The couple often posts their pictures on Instagram with romantic captions. Both of them are animal lovers, they have a pig named Prosciutto and a dog named Smooch. The couple is living a blissful love-life along with their pets in Pacific Heights, San Francisco.

Paige has more than millions of followers on her musical.ly account, "chantellepaige". She more than thousand subscribers on her self-titled YouTube channel.

Chantelle Paige earns an impressive sum of net worth from her music career but the real figure is yet to reveal. Believing some online sources, her net worth is close to million.

Previously, she was the band member of a music band, Filpsyde, and the band did $50,000 sales of their album, State of Survival. Even the song, Champion of their album chosen for the  2008 Summer Olympics in Beijing, China as a theme son.

Besides this, she generates a good sum of money from her YouTube channel and musically.