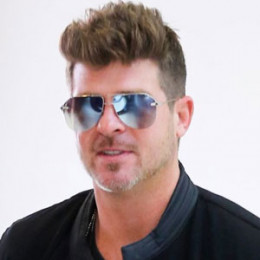 Robin Charles Thicke, better known as Robin Thicke, is an American singer. He has worked with famous artists including Nicki Minaj, Christina Aguilera, K. Michelle, Pharrell Williams, Usher, Jenniffer Hudson, Flo Rida, Brandy, Kid Cudi and so on. He has worked on the albums such as Confessions, The Carter III. He has released his R&B singles including Lost Without U, Magic and Sex Therapy. He came to limelight after he released single, Blurred Lines which reached No.1 on US Billboard 100. Currently, he is in love relationship with April Love Geary after he separated from his wife, Paula Patton. Thicke with his girlfriend is expecting their first child in 2018.

Robin Thicke was born on 10 March 1977, Los Angeles, California from parents Gloria Loring, an American actress-singer and Alan Thicke, a Canadian actor. When he was seven, his parents divorced. He grew with his sibling brother, Brennan, a voice actor and half-brother, Carter.

Being the son of actor and actress, he made appearances in the movies from a young age. He played small roles on The Wonder Years, The New Lassie, Just the Ten of Us and several episodes of Growing Pains with his father.

From childhood, he was interested in music, and his parents were very supportive of his decisions. His dad helped him to write and structure his first son with his vocal group, As One. He wanted to record a professionally produced demo tape, but his father didn’t pay to his demo tape so that he would complete his higher education before he starts his career in music.

A jazz vocalist Al Jarreau, an uncle of one of his group members paid for their demo. Later, his team member made their way to R&B artist Brian McKnight and was impressed by Thicke's performance. Soon, he signed with McKnight’s production company where he co-wrote the song, Anyway, and featured on McKnight’s second album, Remember You. Later, he won a recording contract with Interscope Records at the age of 16.

He first made a name for himself within the industry as a songwriter and producer for other artists. He wrote songs Love is on My Side on Brandy’s eponymous debut album, wrote for 3T’s Brotherhood and has collaborated with Jordan Knight, Jimmy Jam and Terry Lewis in Knight’s album Jordan Knight including the Billboard top 10 hit song, Give It to You.

After working as a songwriter for several years, he began recording his own songs. His single, When I Get You Alone, ranked in the Top 20 in Belgium, Australia, and Italy and peaked the Top 10 singles charts in New Zealand and the Top 2 in the Netherlands.

Then he released his first album in 2003, named, A Beautiful World. The album received very little promotion and listed 152 on the Billboard 200 album chart selling 119,000 copies till January 2012. In 2006, he went on a musical tour of India.Arie and performed on the musical tour titled Once Again Tour along with John Legend.

His second album, The Evolution of Robin Thicke released on 3rd October 2006, nearly a year after the single, Wanna Love U Girl, in 2005. The album peaked at number five on the Billboard 200 and was certified Platinum by the RIAA on 23rd March 2007. The year, he finished promotion for the album and started opening act for the North America leg of Beyonce’s US tour, The Beyonce Experience.

After the huge success of his second album, he released his third album, Something Else, on 30th September 2008. It peaked at No. 2 on the on the Adult R&B chart, No. 6 on the Hot R&B/Hip-Hop chart and No. 59 on the Billboard Hot 100 chart.

Seven months after the release of Something Else, Billboard.com announced that he would release his fourth studio album, Sex Therapy in the fall of 2009 but due to some reason, it was postponed and was released on 15th December 2009. The first single from the album was Polow Da Don. During the interview, he told MTV that he and Lil Wayne are the lucky charms for each other. He had featured on Lil Wayne’s last two albums.

On 1st January 2010, Thicke appeared on ABC’ New Year’s Rockins’ Eve and performed three songs in Las Vegas, in pre recorded segment. Also that year, it was confirmed that he along with Melanie Fiona would feature on The Freedom Tour with Alicia Keys. Also, he actively participated in BET’s SOS Saving Ourselves: Help For Haiti telethon concert which was held in response to the Haiti earthquake 2010.

Moreover, he has released three other albums Love After War in 2011, Blurred Lines in 2013 and Paula, his seventh studio album was released on 1st July 2014. His last album was released by Star Trak Entertainment and Interscope Records which was served as a tribute to his wife Paula Patton.

Robin was once a married man. When he was of 14, he met the actress, Paula Patton during 1991 at an under 21 hip-hop club Balistyx, on the Sunset Strip in Los Angeles where he sang, Jungle Fever and asked her to dance. The couple began dating at the age of 16 and married in 2005.

The husband and wife had one child, Julian Fuego Thicke. After twenty-one years together and nearly nine years of marriage, they filed for a divorce on 9th October 2014, and it was finalized on 20th March 2015.

Currently, he is dating model, April Love Geary since 2014. The couple started dating in October 2014. They made their relationship public during the 2015 Cannes Film Festival. A year before they were spotted together at Leonardo DiCaprio’s birthday party.

The boyfriend-girlfriend has announced that they are expecting a baby girl and will be welcoming their daughter at the occasion of Robin’s late father Alan Thicke's birthday, in March 2018.

Robin is one of the successful American singers who has not only earned popularity among the viewers but also an enormous amount of net worth as well. He has an estimated net worth of $15 million.

Currently, he is living in his lavish bungalow of Los Angeles, valued around $3 million. The house has a swimming pool, Jacuzzi, home cinema, home office, recording studio, parking and much more. He is passionate about cars and has a different collection of cars including 991-sports car manufactured by Porsche.

Paul Patton is the first wife of Robin Thicke to whom he married in 2005. Paul is an American actress better known for her role in the movies Warcraft, Mission: Impossible Ghost Protocol, Precious, and 2 Guns.

Born in 2010, Julian Fuego Thicke is the one and only son of Robin Thicke and Paula Patton.