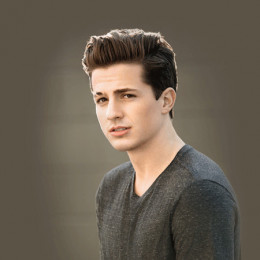 An American singer, songwriter and record producer Charlie Puth who have gained worldwide popularity after writing and singing on Wiz Khalifa's single "See You Again". Before he was popular he uses to post original songs and covers to his hit YouTube channel CharliesVlogs. He is the son to Charles and Debra Puth. In 2010 he completed his graduation from Rumson-Fair Haven Regional High School. He has also attended Berklee College of Music. He created his YouTube account in September 9, 2009 and started to post video and later he changed it into strictly a music channel. After he performed along with Emily Luther, the cover of Adele's "Someone Like You." in Ellen show he was signed by Ellen DeGeneres' record label. Recently he collaborated with Meghan Trainor and released duet song "Marvin Gaye" which was registered in ARIA: Platinum.

Though in an interview he disclosed that he had his first kiss when he was 13 years old. There was a kissing scene in his music video of Marvin Gaye where he was seen kissing Meghan but later he disclosed that it was only for video and nothing more than that. According to him, he has a huge crush on model Kendall Jenner.

Like many other beautiful couples, Puth took Instagram this Valentine 2019 and revealed his girlfriend with his fans.

Though the image was pretty blur, it was clear that the lady is none other than Charlotte Lawrence. He wrote "Happy Valentine's Day" on the post while wrapping his arm around his girl.

Rumors about their relationship swirled in media when they attended New York Fashion Week together earlier in February 2019.

He released his debut single in 2015 named "See You Again".