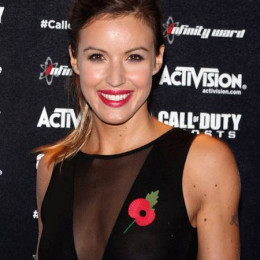 A beautiful and gorgeous English television presenter. She attended Tapton School. Since her childhood she had keen interest in athletics thus she used to take part in elite junior athletics. She graduated from Newcastle University where she studied language. In starting of her career she worked as part-time as a personal trainer, amateur model and fitness instructor. She is also avid fan of Sheffield United. She worked as TV presenter for Real Madrid TV after she moved to Spain.Around 2006 she moved to Asia and joined join ESPN. She is also sports broadcast journalist for BBC Look East. She is involved in various charity like the Bobby Moore Fund for Cancer Research UK for which she ran in London marathon.

Till now she has not involved herself in any kind of controversial situation that can ruin her career. Exploring her personal life she has not married yet but that doesn't mean that she is available. Since is currently dating her lover who is an actor. Together they look very happy couple sharing common happiness and mutual understanding. She has not yet been a biological mother.