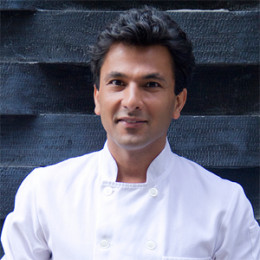 An award-winning chef, restaurateur, and cookbook writer, Vikas Khanna is a son of Davinder Khanna and Bindu Khanna. He graduated from the Welcomgroup Graduate School of Hotel Administration from Manipal in 1991. Khanna started a restaurant named Junoon on 2nd Dec 2010 in Flatiron district of Manhattan, New York. In 2011, Vikas hosted the TV Show entitled MasterChef India (season 2), an Indian competitive cooking game show based on the original British version of MasterChef, which is telecast on 'Star Plus'.

Vikas Khanna became a part of a controversy when he asked PM Narendra Modi to autograph the National Flag, to which the PM obliged gladly. He has been spotted with many people as his girlfriend and he states the girls with whom he is close with are all his good friends. Khanna is the goodwill ambassador for 'Smile Foundation' and also supports the cause of malnutrition in India.