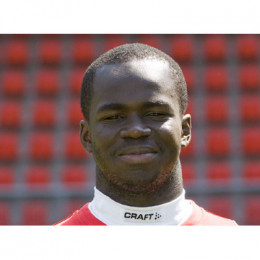 Cheick Ismael Tiote was an Ivorian Football player. He always plays for Ivory Coast national team and for Newcastle United as a defensive midfielder. At the age of 10, he started playing football in the street with barefoot. In 1998 he had started his youth career. In 2005 he has made his professional debut from Belgian Club Anderlecht.

Cheick Tiote had married twice. He used to live in a village with his first wife, Madah. He has two children from his first wife.

Get To Know More: Danielle Colby

When Cheick was already with his first wife, he got married his second time in 2014. He also had an affair with a mistress with whom he has a child but her any information is not revealed.

Cheick Tiote had an estimated net worth of not less than $2million. His football career was his major source of income.

He had Madah as his first wife . The lived in a village and later on they had moved to Newcastle before there came a rumour about his second marriage.

Laeticia Doukrou was his second wife about whom the rumors were heard and this marriage had gained a lot of audience and was later on confirmed by his agent.