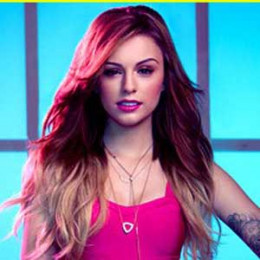 English singer, songwriter, model, and rapper, Cher Lloyd shifted back to the UK after two years of living the high life in Los Angeles. Lloyd's debut single, "Swagger Jagger," released in July 2011. The single entered at number one on the UK Singles Chart and number two in the Republic of Ireland. She released her second album, 'Sorry I'm Late' in 2014. Her debut album 'Sticks and Stones'sold 41,000 copies to 31,000 copies. She also signed to US record label Epic Records in 2012.

Cher Lloyd was born on 28th July 1993 in Malvern, Worcestershire, England, United Kingdom. She is a daughter of Darren Lloyd and Diane Lloyd.

She grew up with siblings Sophie Lloyd, Josh Lloyd, and Rosie Lloyd. Her family is of Romani origin, and she spent the first year of her life traveling around Wales with her parents in a caravan.

After almost a year of living on the road, she along with her parents moved with her maternal grandmother Liz in Malvern, Worcs. Her grandmother raised her eight children single-handedly in the age-old traditions.

Lloyd was just a four-month-old baby when she was taken to live on the road with her young parents, Diane and Darren.

Cher Lloyd gained fame after performing at 'The X Factor Live' in Glasgow on 1st April 2011. She had previously auditioned for 'The X Factor' before singing ballads but did not make it through.

After the final of the season 7 of 'The X Factor,' it was announced that Syco Music had signed her.

Her debut studio album, 'Sticks + Stones,' was released on 4th November 2011, with the album debuting at number seven in Ireland.

In January 2012, Cher Lloyd announced her engagement to her boyfriend of less than a year, Craig Monk, a hairdresser. The couple married in a secret ceremony on 18th November 2013.

They have no children yet and are living a happy life with no signs of getting a divorce. The pair also has a pet dog named Gina.

Singer and rapper, Cher Lloyd has an estimated net worth of $2 million. She has  Mercedes GLS SUV.

In January 2012, Cher Lloyd announced her engagement to her boyfriend of less than a year, Craig Monk, a hairdresser. The couple married in a secret ceremony on 18th November 2013.