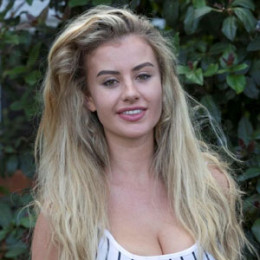 Chole Ayling is a British model who got recognition after her appearance in the videos strip football of the popular You Tuber JMX.

Chloe is a glamour model by profession. She began her career with BAME Models. Her fame rose to prominent level when she featured in strip football, videos by popular YouTuber JMX in 2016.

In the video, she is seen alongside model Jessica Rose. Throughout her career, she has worked with popular brands like Calvin Klein. She also featured in publications like The Daily Stars.

The 20-year-old fashion model Chloe is currently a single mother. The biological father of her son is her ex-boyfriend Conor Keyes. The duo was in a relationship until 2016. Her son was born in November 2015.

In 2017, Ayling reported that she was kidnapped when she traveled to Milan for a photo shoot. She was drugged and kidnapped by the international human trafficking syndicate Black Death. She was held captivate in Turin, Italy for almost six days.

The freckles have returned lol

Lukasz Pawel Herba, the lead kidnapper was arrested along with his partner in crime on July 17.  They got arrested when Lukasz took Chole to Consulate in Milan so as to exchange her for money. The kidnappers before being arrested demanded $35 million dollars with the victim.

Some reliable sources reported that the kidnapped model has a two-year-old son with her ex-boyfriend Conor Keyes. She has not revealed further details about her current affair and family, still, she is reported to be single at the moment.

Chloe has over 222k followers on Instagram as of January 2019. She possibly makes a decent amount from her modeling career. But the exact figure of her net worth is yet to be shared.