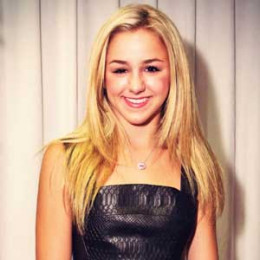 Chloe Lukasiak is an American child star, child dancer, television personality, actress plus model. Chloe earned huge name and fame at a very early age. She came to the limelight after the show, Dance Moms. She won various awards for her dedication and determination. Chloe has her own YouTube channel with millions of subscribers. She is now single and living a luxurious life.

Born to the mother, Christi Zook Lukasiak, and father, Marc Lukasiak on 25th May 2001 in Churchill, Pennsylvania Chloe is a White-American. Her mother appeared in Dance Moms, and her father works in the marketing of Children Hospital. Clara Lukasiak is her younger sister.

At the early age of 2, she started learning dance from Abby Lee Dance Company. She was firstly limited to basic dance forms like- jazz and ballet. But as she grew up, she started performing various dance forms and styles except for ballroom.

From 4-13 years she began to compete in various competitions and won multiple titles like National Miss Small Fry and Junior Miss Dance Pennsylvania in 2011, National Junior Miss Fry in 2011. She also reached up to 12th position in Philadelphia YAGP Semi-Finals, 2011.

Chloe came to the limelight after being the original cast member of ''Dance Moms''. She along with her mother was on the show for almost four seasons from 1-4. From the show, Lukasiak grabbed the attention of millions of fans and audiences.

Later on, she appeared in a music video, ''Summer Love Song''. Her popularity took her to many talk shows including- ''Katie'', ''The View'', Anderson Cooper'' and ''Showbiz Tonight''. In 2014 Chloe left the show, Dance Moms because of the fight between her mother and Abby Lee Miller, a choreographer.

After leaving the show, Chloe continued her training in dancing from Studio 19 Dance Complex. During the training, she was appointed as a demonstrator and assistant in the VIP Dance event convention for Blake McGrath.

In 2015, Lukasiak appeared in Center Stage: On Pointe in a supporting role. Moreover, she also appeared in several movies including- Children of the Dead (a horror film), A Cowgirl's story and Loophole as a supporting actress.

She also worked in various web series like- Super Store (a TV promo) and Welcome To My World as a guest.

Besides these, she also started a YouTube channel named, Chloe Lukasiak with more than 1 million subscribers. She used to upload various videos related to her dances with millions of views.

After that, she also started her modeling career in 2015 and appeared as a model in various fashion lines like- 90 Degree by Reflex, Sally Miller, and Glitzy Girl.

Chloe was awarded many prestigious awards including- Teen Choice Award for Choice Dancer, Favorite Dancer17 and Under Award at the Industry Dance Awards in 2015. She almost won CelebMix Best Dancer Contest in 2016.

In 2015, Chloe was in a relationship with the pop singer, Ricky Garcia. They first met at the Radio Disney Awards. After the award, they started dating. They together uploaded many videos on YouTube and also posted various photos on social networking sites.

Currently, there is no news about her dating, and she might be single.

The talented, Lukasiak has an estimated $6 million as her net worth. She earned a good amount from her modeling, dancing plus YouTube Channel.

Lukasiak's wardrobe looks very expensive as well as gorgeous too. She is living a luxurious life. She has a huge fan following of 6.1 million on Instagram and 785k on Twitter.