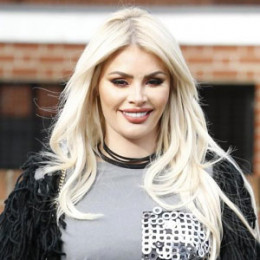 Glamorous British television personality, Chloe Linda Daisy Margaret Sims, better known as Chloe Sims, who rose to fame from the ITV2 reality series, The Only Way Is Essex. Besides TV personality, she is also a model and entrepreneur. She has linked her name with different celebrity including Elliott Wright, Joe Fournier, Darrell Privett.

Born on 2nd November 1981, Chloe Sims spent her childhood in the city of Newbury Park, London, England and lived with her father Tony Sims, a boxing trainer. At the age of 3, her mother left her so she does not have any memory of her mother.

She is the cousin sister of former cast mates of The Only Way Is Essex: Joey Essex and Frankie Essex.

Chloe rose to fame from a British television soap opera based in Brentwood, England named The Only Way Is Essex, created by Ruth Wrigley and Tony Wood.  Till now, they have produced 20th series and has over 249 episodes.

She appeared in the show The Only Way Is Essex in series 2 as supporting role where she started to form a close relationship with her ex-best friend, Lauren Pope in 2011. But now, she is taken as a primary cast member of the show. Apart from the show, she was also seen in The Most Shocking Celebrity Moments 2013 and Pride of Britain Awards 2014.

In 2011, she was in love affair with Kirk Norcross. Their relationship did not last long. From the year 2012-2013, she dated Darrell Privett.  In the year 2013, she was linked up with Joe Fournier, one of the personal trainer. They were spotted together spending a romantic date in different places.

Chloe had an on and off relationship with co-star Elliott Wright from The Only Way Is Essex, from series 13 until series 15. But later, Elliott apparently claimed that his relationship with Chloe was just for the television.

Currently, she is dating Robert Tchenguiz, a millionaire since January 2016. Robert is 20 years younger than Chloe. They were spotted spending holidays in swanky French resort. The couple is photographed spending time together many times.

Chloe Sims is a single mother of eleven years old daughter, Madison. Her biological father is Matthew, who is really close to her though her parents are separate.