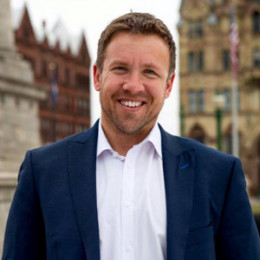 Chris Fowler is an American sports broadcaster currently an employee of ESPN, praised for his work on College GameDay, Saturday Night Football, College Football Playoff, and College Football National Championship. Fowler is a married man residing happily in the United States along with his wife, Jennifer Dempster.

He replaced Brent Musburger for Saturday Night Football on ABC in 2014 as the play-by-play announcer.

Fowler went to General William J. Palmer High School. He earned his degree in Radio/Television from the University of Colorado. He received the Alan Berg Memorial Journalism Scholarship awarded by Denver Press Club.

Chris Fowler worked as an anchor covering high school sports events for the Rocky Mountain News while in the University. He did an internship at KMGH-TV before working as a production assistant, producer, writer and a sports reporter at KCNC-TV.

In 1986 he joined ESPN as a host and reporter of Scholastic Sports America and also served as a sideline reporter for college football. He gained a critical acclamation after interviewing imprisoned former college football star Charles Thompson.

Afterward, he started covering men’s college basketball in ESPN’s College GameDay as in-studio host. Later on, Rece Davis was appointed as a host of GameDay whereas he continued serving as a play-by-play on ABC’s Saturday Night Football and College Football Playoff games. He also hosted the annual Heisman Trophy presentations.

Furthermore, he is the head studio anchor for tennis tournaments broadcast such as Wimbledon, Australian Open, French Open and US Open. In 2010 he covered the 2010 FIFA World Cup along with ABC’s Mike Tirico. Besides, he is the host of the ESPN Classic show SportsCentury.

Fowler is married to his beautiful wife Jennifer Dempster since 2006. Dempster is a former fitness model as well as an instructor. They dated for a year before exchanging vows. The ceremony was held in private events in the presence of friends and family. So far the pair doesn't have any children.

As a sports broadcaster, Fowler earns a lucrative amount from his career. His annual salary is $1.5 million whereas he holds the staggering net worth of $4 million.

Jennifer Dempster a former fitness/instructor is the lovely wife of Chris Fowler. The duo tied the knot in 2006.