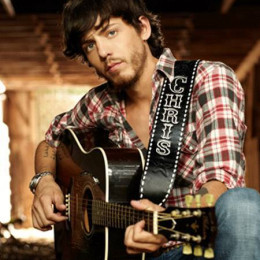 An American country music singer and song writer who has already charted on the Billboard country singles charts. He has already written song for popular singers like Tim McGraw and Justin Moore. He started his career by signing for BNA Records from where he released his first single 'Til a Woman Comes Along', which charted on No. 56 on the Billboard Hot Country Songs charts. He released his single music named "Buy Me a Boat" in 2015 which was ranked number 33 on Hot Country Songs.

Exploring his personal life, he has already married the love of his life, Kelly Lynn. Though he has not disclosed a lot of information regarding her picture along with him can be found in different sites. Till now there has been no report of him having an extramarital affair with anyone which also proves that he is very faithful to his wife. The couple is blessed with one daughter and a baby boy.

She is the eldest daughter of the couple. She is cute and gorgeous.

He weighed 6 pounds, 9 ounces and measured 18 inches when he was born.