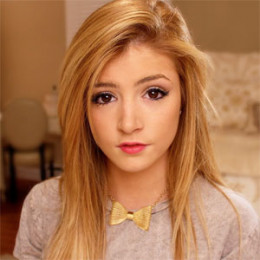 American singer as well as a social media personality, Chrissy Costanza is known as lead vocalist of American pop rock band, "Against The Current" since 2011. Costanza is also a beauty guru and a rising vlogger of her self-titled YouTube Channel.

Her cover songs and beauty tips videos on YouTube has made her a vlogging sensation with more than 700k subscribers as of 2018. She also has her own blog where she writes about her bands and gives updates but she's not been active on it since 2016.

Chrissy Costanza was born on 23rd August 1995, in New Jersey, the United States to her mother Elizabeth Costanza. She belongs to White-American ethnicity and holds an American nationality.

Costanza has a brother, Mikey Costanza who is an actively supports his sister and the rest of the band members of Against the Current.

Costanza went to the Fordham University for one year, before dropping out to pursue her music career. Since her childhood, she wanted to become a musician and she also revealed that her biggest inspirations in music growing up were her parents.

The Against the Current frontwoman, Chrissy Costanza joined the band in the summer of 2011, shortly after she became familiar with the fellow band member Dan Gow, Will Ferri, and Jeremy Rompala, whom she met through a mutual friend.

The band was formed back in 2011 by her along with Will Ferri, Dan Gow, Jeremy Rompala and Joe Simmons. Jeremy Rompala left the band three years after it was formed. The band started getting significant public attention after uploading a few numbers of cover songs on YouTube. Their official YouTube channel got famous after the release of their first single, Thinking, in 2012.

The band also collaborated with well-known YouTube cover artists, Sam Tsui and Alex Goot. Some of their most viewed videos are cover songs of songs including LET ME LOVE YOU, SORRY, 2U, Closer, and so on.

In May 2015, the band went on their first headlining tour, the Gravity World Tour. They spent over four months in three different continents; North America, Asia, and Europe.

In August 2015, the band revealed that they had finished the recording of their first full-length album, In Our Bones which was released on May 20, 2016. The album was even named pop-rock perfection by Alternative Press.

Chrissy Costanza, 22, has an estimated net worth of $1 million as per some sources but the exact amount is still under review. According to some online tabloids, the payment of any lead singer ranges from $20,032 - $200,978. So we can assume that her salary falls within that range.

Chrissy Costanza is in a relationship with her boyfriend Cameron Hurley. He is the Lead guitarist & backing vocalist for the New York-based, pop-rock band We Are the In Crowd.

The couple is together since December 2015 and shares a healthy relationship. They often post pictures of each other on their official Instagram accounts.

When she's not singing or YouTubing, she loves binge-watching series including Vampire Diaries and The Walking Dead. Costanza’s favorite stores include Urban Outfitters, Sephora, Nordstrom, Topshop, and Abercrombie Kids.

Her favorite holiday is Thanksgiving and Christmas. Her favorite colors are red and cobalt blue. She prefers boutiques to brand-name clothing stores.

Below we present a short clip of Costanza in Q&A session with Beautyproducts.com.