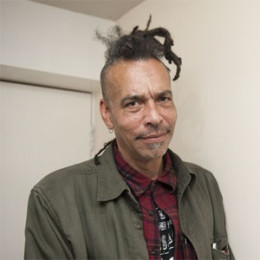 American singer-songwriter, Charles Mosley, is better known as the former frontman of the band, Faith No More. During his time with the band, he released two albums; 'We Care a Lot' and 'Introduce Yourself.' His journey in the music industry began after meeting American musician, Billy Gould. The great singer died at the age of 57 in November 2017 due to a heroin overdose.

Chuck Mosley was born Charles Henry Mosley III on 26th December 1959 in Hollywood, California. His biological parents gave him up for adoption as an infant. Coincidently both his adopted and biological parents were from the same ethnic group.

In a 2013 interview, Mosley talked about his adoptive parents. He said, "They were interracial - my mom was Jewish and my dad was black and Native American. So that was something controversial in itself. My dad had a daughter and my mom had two daughters, and all they were missing was a boy, so they went out and adopted one, and it was me."

During the initial phase of Mosley’s music career, he met Billy Gould when they attended a show of American band, The Zero. Later on, in 1979, he appeared as a keyboard player in Gould’s first band called, The Animation. He then joined another band, Haircuts That Kill in 1984. A year later, he joined Faith No More replacing the lead singer, Courtney Love.

The band signed a contract with Slash Records and went on several tours with prominent bands including Red Hot Chili Peppers. After several years working with the band, Faith No More, in 1989, Mosley sued one of the members of the group claiming a partnership interest on the band’s financial assets.

In 1990, he joined the punk band, Bad Brains. He did almost sixty shows throughout Europe with them but eventually left the group in 1992. After working several years for other’s band, he finally decided to form his own funk metal band and named it Cement. The band released two albums back to back including Cement and Man With The Action Hair distributed by Rough Trade and Dutch East India Trading.

He met with an accident while on tour with his band Cement to promote their second album Man With The Action Hair which forced him to take a leave from the music industry for a while. In the time duration, he spent more time with his children and even worked as a chef.

In 2009, Mosley released new music under the name Vandals Against Alliteracy(V.U.A).  The band released their album, Will Rap Over Hard Rock For Food in 2009 featuring Jonathan Davis, John 5, Michael Cartellone, Roddy Bottum and others. In 2010, Mosley performed at a concert with his former band Faith No More in San Francisco for the first time since 1988.

In 2014 he announced that he was financially broke and he and his family are on the verge of eviction. He said,

"The shocking truth is, that I'm not rich. We struggle every day, just like most everybody, more, right now, worse than ever, in a long time. I'm ashamed for being in this condition. Our band, VUA, has had to put off trying to tour or play any shows. We're starting to record new stuff, but even that is suffering at the hands of my family's financial situation."

So, a year later, Mosley again made an appearance at a Faith No More concert, performing the track "Mark Bowen" at their Detroit show. In mid-2016, he toured with the group, he performed an unplugged show in the United States.

In 2017, Mosley joined an international industrial supergroup, Primitive Race by Chris Kniker which include Mark Gemini Thwaite (as a guitarist), Erie Loch and Dake Crover (as a drummer). The group released their second album Soul Pretender in November.

Chuck Mosley was in a longterm relationship with his girlfriend, Pip Logan. Mosley seemed like a person who liked to keep his love life away from the limelight. They rarely appeared in public and posted only occasional pictures together. Mosley was a proud father to two daughters; Erica and Sophie, he spent much of his spare time with his daughters.

At the age of 57, on 9th November 2017, the legendary musician, Mosley was found dead in his living room’s floor at his home by his girlfriend. After postmortem, it was found that he died of heroin overdose.

The singer was struggling with sobriety issues. His family issued a statement after his death which read,

‘’ After a long period of sobriety, Charles Henry Mosley III lost his life, on November 9th, 2017, due to the disease of addiction. We’re sharing the manner in which he passed, in the hopes that it might serve as a warning or wake up call or beacon to anyone else struggling to fight for sobriety.’’

The late singer is now survived by his girlfriend Pip Logan and two daughters Erica and Sophie and grandson Wolfgang Logan Mosley.

American singer, Chuck Mosley had released many songs and albums and even performed many concerts. But despite that, he had a negative net worth while he was alive.

In late 2014, he was once financially broke was on the verge of eviction. The same year, he had requested all his fans to send him money as donations to his Paypal account because he suffered a severe financial crisis. He even sold a digital format of his song, Demosforsale for $1 million. In addition, his family also asked for the donation for his cremation.