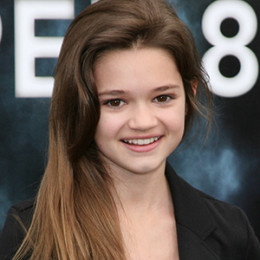 Ciara Bravo, an American actress is well known for her works particularly in Nickelodeon's series Big Time Rush as Katie Knight and Emma Chota on Red Band Society. The Alexandria, Kentucky born TV star was brought into mainstream acting by the talent managers Frederick Levy and Bryan Leder of Management 101. .

Who is Ciara Bravo Dating?

Cira Bravo hasn't confirmed her relationship status nor she's provided the identity of her boyfriend to this date. Yet, it seems like she is somehow linked to her Wayne co-star, Mark McKenna.

McKenna is known for his appearance in Sing Street, Overlord, and Wayne. Either of the co-stars turned partners socials like Instagram is showered with the pictures of one another. They prefer to spend quality time together be it on-screen or off-screen.

The BTR previously in a relationship with actor Jack Griffo. They started dating on March 4, 2013.  They shared the screen in Jinxed as well. However, the lovers called it quits citing personal issues in the fall of the same year.

Bravo has never been romantically linked to any man before Griffo. Nevertheless, the See Dad Run star is recently having an affair with Kira Kosarin in 2012.

How Much Is Ciara Bravo's Net Worth?

Ciara Bravo has an estimated net worth of $2 million as of 2019. She earns big bucks from her career as a model, actress and voice actress. The blonde beauty is paid well for the endorsing Xbox.

Bravo already had a keen interest in acting but her modeling skill was discovered at the Mike Beauty Model and Talent Expo while she was nine years old.

Ciara Bravo started her career as a voice actress in the TV series Can You Teach My Alligator Manners? as well as Special Agent Oso. She has been widely acclaimed as the star of the notorious  Nick series Big Time Rush and Red Band Society for the roles of Katie Knight and Emma Chota respectively. The 22-year-old actress worked with Katelyn Tarver, Logan Henderson in BTR.

Moreover, her voice credits include Open Season universe, Happiness Is a Warm Blanket, Special Agent Oso, and Playhouse Disney. Bravo has worked in the movies including Jinxed and Swindle. Even more, she starred in music videos and commercials as well.

Some Unheard Facts of Ciara Bravo