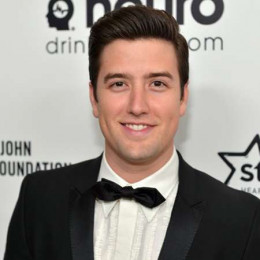 An American actor and singer, Logan Phillip Henderson is noted for his role in the Nickelodeon series Big Time Rush, as Logan Mitchell as well as being a member of the Big Time Rush band. Being associated with the band, he has won several awards and has been nominated for multiple awards.

Is Logan Henderson in a Relationship?

The 24/7 star Logan Henderson is possibly single at the moment. He has been in a number of intimate relationships in the past. For now, he is focused on building a career rather than making girlfriends.  He is not seen with any women after the bitter split with Makenzie Vega.

People confirmed Logan and Mackenzie were in an intimate relationship post he got a kiss on the neck from Vega. After having an affair for almost two years they called it quits in 2016 citing personal issues.

Prior to her, Logan was romantically linked to Britt Robertson in 2011. He might have some plans of enjoying a happily married life with someone special and deserving in the near future.

Temple Texas-born actor has also been linked to actress Erin Sanders and singer Demi Lovato in 2010s. The alleged couple chose separate paths after shorty after their love for one another started taking shape.

How Rich Is Logan Henderson?

Logan Henderson has an estimated net worth of $10 million as of 2019. His primary source of income is a career as an actor and musician.

Other than that, Henderson pockets big bucks as a songwriter too. He was paid well for signing a contract with Sony Music Entertainment and Columbia Records.

Logan Henderson worked with Kendall Schmidt, James Maslow in Nickelodeon series Big Time Rush. Some of the TV series, Henderson has appeared include Brain Surge, How to Rock, Figure It Out, Marvin Marvin and Nick News.

Some Interesting Facts of Logan Henderson