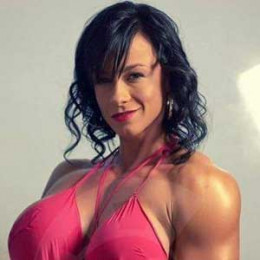 The Swiss fitness trainer, Cindy Landolt is such an inspiration for all the females of the world and her physique desirable for all the males. Cindy is the owner of an exclusive gym in Switzerland and is also the nutrition expert as well. Landolt is still single with no relations and marriage records. She is more concerned with her career rather than other things.

The fitness model, Cindy Landolt was born on 11th January 1985 in Zurich, Switzerland with the birth name, Cinderella Landolt. Her ethnicity is white and holds Swiss nationality.

She attended Swiss Academy of Fitness and got a diploma in fitness instructing. Landolt is from a small town and grew up around alpine air and mountain scenery.

From the early age of 5, she joined the gymnastics team and became an expert after years of an intense workout.

She won various medals and was passionate about her career in gymnastics. Apart from that Cindy took parts in different games like- swimming, skiing, and snowboarding during her college days.

At the age of 16, Cindy's body changed as she grew tall and muscular. This change motivated her to develop a career in being a trainer.

After her graduation, she became an official fitness trainer and developed her own website to offer services online.

In 2016 Cindy became an online sensation as the number of followers kept on increasing nationally and internationally.

Christmas is over, belly’s are fulI hope you all had a great time..?! . I spent the 24th of December with my Family and Loved the time with all of the Landolt-Members . Just got home from the Gym and feeling top motivated after a full day of Personal Trainings.. seems everyone is back on track . What are your plans for New Years eve? Party and Fireworks or Movie and Wine . I think I will hit the Gym and then watch the Celebration from my Balcony wrapped up in warm sheets . Love, Cindy . #fitnessmotivation #fitnessmodel #love #cindytraining #fitnesslifestyle

With the help of her YouTube channel, many people were inspired and motivated. Later on, she opened her fitness club in Zurich, Switzerland.

The shredded abs superwomen, Cindy is single. There is no news and rumors about her dating. She is in her 30's, but she has got no plans of getting married. Cindy is more concerned about her career rather than being in a relationship.

The secret of her great figure is the workouts and the nutrition. She has a diet plan of having healthy food, protein, green vegetables to maintain her physique.

Cindy Landolt's net worth is not revealed. Her source of income is her YouTube channel and her fitness studio.

Her website, cidnytaining.com had already 101,000 subscribers. Cindy might have a significant income and is living a celebrity life.