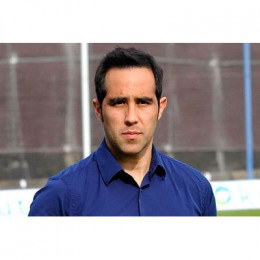 Claudio Andres Bravo Munoz is a Chilean professional soccer player. He plays for Chilean national team and Spanish club named FC Barcelona. He plays as a goalkeeper. When he was in his early age his father got impressed by his football skills and admitted him to Coco Colo academy. In 2002 he made his professional debut from the club. Because of his outstanding performance in the club he was given a nick name Condor Chico.

At the age of 19 he had made his debut in soccer career. In 2004 Copa America he had made his debut in the main side against Paraguay. In Spain for seasons 2006-06 he had signed 5 years contract with Real Sociedad for €1.2 million. With four year deal for €12 million Claudio has joined FC Barcelona in 2014. In seasons 2013-14 he had to take 10 days rest because of his injury. He is one of the best goalkeeper of the world.

He had married to his girlfriend with whom he had dated for ten years. Now he is living wonderful life.