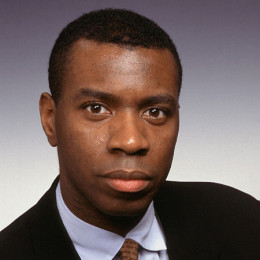 An British television news journalist who is better known as co-presenter of the BBC's weekend evening shift. He is born to Jamaican parent. When he was just young his parents got divorced and he lived with his mother. In 1985 he graduated from the University of Sussex in law. He started his career in journalism as graduate journalist programme. At starting he worked as reporter for Radio Bristol. In 1996 he was appointed as BBC foreign correspondent. Recently he was in Kathmandu the capital city of Nepal for the coverage of the earthquake that struck the city on 25 April 2015. During his career he has been awarded with Golden Nymph at the Monte Carlo Television Festival in 2003.

Talking about his personal life he is a happily married man. Though he has not disclosed detail information on her, according to him she was the one who gave him courage and space to pursue his dreams in journalism. He has not disclosed any information regarding his children. Since he has very healthy and smooth relationship with his wife, he is not gay and it is unlikely to arise any condition of divorce.

Clive Myrie was born on  25 August 1964 in Bolton, Lancashire to  Jamaican immigrant parents. His mother was a seamstress and his father was a factory worker making car batteries.

After his parents' divorce, he started living with his mother and his father returned to retirement. Myrie attends the Hayward Grammar School in his home-town of Bolton and completed his graduation in 1985 from the University of Sussex with a law degree.

There is no information available about her. Couple's picture during different events and programs can be found in different sites.