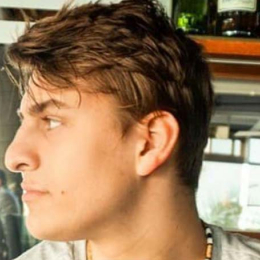 Finding limelight isn't hard when you are the better half of the famous social media star. Well, Collin Vogt caught the media attention after dating the popular beauty vlogger and internet sensation Gabriella Demartino. He is also popular as a Youtuber and Instagram star.

Personal Life of Collin Vogt; Who is he Dating? Know about his relationships status:

Collin Vogt is presently in a dating relationship with the famous beauty vlogger and internet sensation, Gabriella Demartino. The couple is together from over four years and is deeply fallen in love. Moreover, the pair looks stunning together and often feature in their respective youtube channels together.

Collin first met Gabi in the summer of 2015 and started hanging out together for a couple of weeks. They both officially started dating from July of 2015. Since then, the pair lives together and share a very beautiful rock-solid bond. Further, there will be no wonder if the pair soon the wedding vows.

Collin is currently out of any rumors and controversies regarding his personal and professional life. The Internet sensation seems focused on his career and is passing his days with the love of his life. Additionally, Collin is a famous internet personality and uses social media platforms like Instagram, Twitter, and YouTube.

What is the Net Worth of Collin Vogt?

Collin Vogt holds an estimated net worth of $200,000. The social media star is able to grab that fortune by working in social media platforms like Instagram, Twitch, and Youtube. In addition, the average salary of a YouTuber is $3-$5 per 1000 video views, which means a Youtuber will earn $5000 per 1 million views.

Had an amazing time with my beautiful date to @beautycon

Collin joined the Youtube in 3rd January 2013, however, he uploaded his first video on November 22, 2016, entitled Male Perspective On Girls Products. After that, he started publishing videos with his girlfriend especially related to experiments and funny videos. Furthermore, his most watched video owns over 1.3 million views. Here you can look at the Youtube video of Collin with his girlfriend roaming in different places;

Collin's girlfriend Gabriella is a famous Youtube personality who holds an estimated net worth of $500,000. Since the duo lives together, they also share their earnings. In fact, the duo also shares a Lexus SUV which has a market price of $43,570-$49,220.