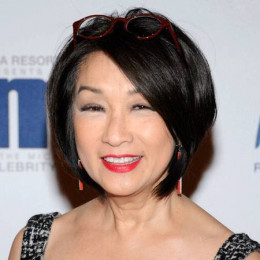 Constance Yu-Hwa Chung Povich professionally known as "Connie Chung", is a journalist. She has worked as a reporter and anchor with several Television channels such as CNN, ABC, NBC, CBS and MSNBC. In 2013, she got nominated for New Jersey Hall of Fame for General Services. She earned degree in journalism from the University of Maryland, College Park in 1969. She is the daughter of William Ling Chung, an intelligence officer in the Chinese Nationalist Government.

Moving on to her personal life, till now she has been married only once. She does not have children from her marriage but she has adopted a son, Matthew Jay Povich. Before marriage, she dated a man but after getting married, she stayed totally loyal towards her husband Maury Povich.

Controversy arose when she got displaced as co-anchor from CBS Evening News after an interview with a fireman which seemed inappropriately combative, during rescue efforts at the Oklahoma City bombing.

She revealed that she was sexually assaulted by her family doctor who delivered her as a baby.

She is known for her work in the U.S. television news networks MSNBC, NBC, ABC, CBS, and CNN.

He is a television presenter, well known for hosting the tabloid talk show Maury. The couple first met in 1968 at the local TV station in Washington, D.C. (WTTN).

He was adopted by Connie and her husband on June 20, 1995. He studied at Allen-Stevenson School and the Riverdale Country School.